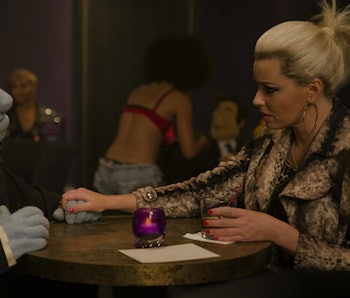 Puppets might be full of white stuffing and a fun-loving spirit, but the Muppet-like puppets of The Happytime Murders are stuffed with something much, much filthier than pure cotton.

The Happytime Murders, out on August 24, is a raunchy crime noir set in present-day Los Angeles. There’s a disgraced cop turned private investigator who drinks and smokes too much. He’s got a former partner harboring a grudge, an actor brother who winds up dead, and a sexy femme fatale client that hires him for a weird job that ties right back in to the main drama. In every way, the core story feels like a totally derivative and predictable modern noir that would be tired if not for one obvious fact: Half the characters in this world are classic Jim Henson-style puppets, and one thing’s for sure: These streets are much darker than Sesame Street.

As such, viewers might never look at puppets the same way again after seeing some of the things that go down in The Happytime Murders, because it’s not only often hilarious, but also occasionally haunting.

Everyone knows that inside each puppet is a bounty of good-natured stuffing — but as the film reveals, there’s also an endless addiction for sugar, a bottomless lung capacity, and an uncomfortable amount of ejaculate. This is the bizarro world of The Happytime Murders, a perfectly derivative LA noir that follows every trope the genre’s ever had while showcasing, in funny ways, the insane things that puppets do when children aren’t looking.

Jim Henson Company veteran Bill Barretta performs the voice and puppeteering for protagonist Phil Philips, the first-ever puppet cop to join the Los Angeles police force years ago. But after a disastrous scandal caused the death of a civilian and nearly killed his partner, Philips becomes a PI for hire. The film takes place years later, with Philips as a drunk, chain-smoking loner doing generic voiceovers for the viewer.

After a serial killer begins targeting the former cast members — Phil’s brother included — of a muppet television show called The Happytime Gang, Phil has to team up with his former partner, Melissa McCarthy’s detective Connie Edwards, to solve the case. They encounter drug addicts, incestuous hillbillies, and the inevitable mastermind behind it all: a sex-crazed femme fatale.

If these were real people, this would be the same sinister, bleak story we’ve seen time and time again. But because they’re puppets, it’s easy to laugh off the darkness. The Happytime Murders is sustained by its utter absurdity and how inherently watchable McCarthy is as an actor.

For those who’ve always wanted a more mature muppet movie, The Happytime Murders is a brisk and enjoyable 91 minutes of crude humor set in the seedy underbelly of Los Angeles. If it were any longer, the film might be grating, but it winds up being just enough.

Whereas previous Jim Henson Company movies offer interesting characters, fun musical numbers, and maybe a novel story, The Happytime Murders doesn’t really manage to achieve any of those things. Just about every character and plot point is predictable and one-dimensional, and that’s totally fine for viewers who genuinely want to see an octopus puppet milk a cow puppet for pornographic reasons, but it might leave other viewers wanting something more.

Lots of fucked-up stuff, like the whole octopus-cow thing, happens throughout The Happytime Murders. With the exception of Detective Edwards snorting puppet sugar-cocaine, all of the crazy sex and drugs are done by puppets. Maple syrup is their whiskey and some kind of blue sugar is their cocaine, and even though they have no bones, that doesn’t stop them from having sex.

The film’s best jokes stem from situational humor related to drugs or sex, specifically when puppets engage in one or both. The two best instances of this were unfortunately spoiled by the movie’s trailer: in one, a drug-addled puppet offers sex for sugar, and in the other, when Phil Philips does the dirty deed with a client in his office, his ejaculate decorates the entire room like cans of silly string.

Later, when we visit what’s essentially a crack den, it’s full of puppets snorting sugar. We’d never laugh at this kind of situation if the puppets were snorting sugar next to human heroin users, would we? But The Happytime Murders wants these laughs, so the movie avoids depicting humans doing anything worse than casual racism towards puppets.

Even on a meta-contextual level, just like the humans in the world of The Happytime Murders, we as viewers are only here to laugh at the puppets and assume the worst of them. So despite Phil Philips and other puppet characters lamenting the marginalization of their species, The Happytime Murders presents racism as just another punchline.

Even in terms of the human-nonhuman companionship at the center of the story between Philips and Edwards, The Happytime Murders doesn’t do enough to bridge the racial divide. Netflix’s Bright does more interesting things when it pairs Will Smith with an orc cop in a fantasy world.

Maybe I’m expecting too much from a raunchy puppet movie, especially when The Happytime Murders is more than fun enough, but things would’ve been more interesting if this was an entirely mature world. Put puppets in a legitimately R-rated world rather than putting R-rated puppets into a PG-rated world of humans.

In this way, The Happytime Murders struggles to find a suitable tone for its story. It’s bound to draw comparisons to Team America: World Police, especially when we get a gratuitously lengthy sex scene between puppets. But whereas Team America’s hilarity comes from its blatantly — and consistently — unserious tone, The Happytime Murders wavers by sometimes taking itself too seriously.

But considering the darker noir nature of what’s going on, maybe The Happytime Murders would’ve functioned better if it doubled down on how ridiculous the whole thing was to begin with? That would have been a hardcore story worth telling.

The Happytime Murders will be released in theaters on August 24, 2018.