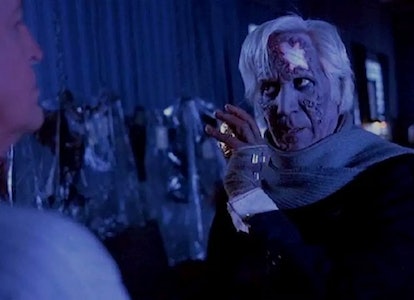 The vampire movie is, fittingly, an eternal tale. Whether it's Dracula, Twilight, or even What We Do In the Shadows, the idea of eternal life mixed with a thirst for blood is always popular. Unfortunately, it isn’t always innovative. There are only so many ways to tell a vampire story. So when a new form comes along, it’s a huge deal.

Horror legend Guillermo del Toro, who recently released his own Netflix horror anthology Guillermo del Toro’s Cabinet of Curiosities, started his career with a vampire story that’s unlike any other. Here’s why you should stream it now while it’s available on HBO Max. And what you need to know before you do.

Cronos, a 1993 Mexican movie, was del Toro’s first feature — and a critical hit. It follows Jesús Gris (Frederico Luppi), an old antique dealer, as he notices a strange scarab-like contraption within an archangel statue, a spider-like device that injects him with a mysterious substance.

Over the next couple of days, he starts to look and feel younger, but this Fountain of Youth-esque machine has a dark downside. He realizes he’s thirsting for blood, which is initially disgusting but eventually becomes unavoidable.

But like any good vampire story, there’s a vampire hunter. In this case, it’s Angel de la Guardia (GDT’s longtime collaborator Ron Perlman), the American nephew of a businessman who is hellbent on obtaining the device in order to live forever. As Angel pursues Jesús and Jesús’ transformation continues, the action amps up to blockbuster levels.

Cronos’ dialogue is (mostly) in Spanish, which brings an interesting texture to the entire film and earned it a place as Mexico’s entry for the Foreign Language Film Oscar (it wasn’t chosen to be nominated.) The language barrier underlines the power dynamic between Jesús and Angel.

Those names are no coincidence. Religion emanates from every pore of this movie. Jesús is incredibly religious, saying his prayers as he uses the device every day. There are parallels to the Biblical story of Lazarus, who rose from the dead and escaped his tomb; and Job, who kept his faith in God even when faced with immense suffering.

But mostly, Cronos focuses on the enticing yet grueling prospect of eternal life. It’s what people strive for, but the reality of it is terrifying and often tragic. Heaven may mean eternal life, but it’s not made for the Earth.

Like all Guillermo del Toro movies, the action and horror elements slowly reach a feverish pace and before you know it, Jesús has become a monster he doesn’t even recognize, waking up in a funeral home and peeling off his own skin. But because of the intelligent storytelling, you hardly even notice. All you want to see is this man live his life with his wife and granddaughter, and in the end, that’s all he wants too — eternal life be damned.