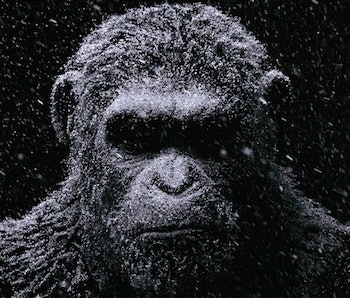 The great ape Caesar lives in the shadow of Batman. Director Matt Reeves was already talking about The Batman when the conclusion to his ape trilogy, War for the Planet of the Apes, hit theaters on July 14, 2017. And before the world even knew Robert Pattinson would put on the cowl, Reeves claimed the ape revolutionary and Bruce Wayne had a lot in common.

This one odd detail sums up the larger misunderstood reputation of War for the Planet of the Apes. By the time it was released, everyone — even its director — had already begun moving on. The film may have capped off a trilogy of fantastic Apes reboots, but five years on, it feels like a franchise that found its footing just in time to die a premature death.

All three Apes reboots — Rise, Dawn, and War for the Planet of the Apes — are much better than cinema history will remember. Considering that the original Apes saga set the standard for gonzo science fiction movies by peddling absolutely bonkers premises to the masses, the fact that an even more mainstream series of reboots was decent, much less good, is a minor miracle.

Although the actual sci-fi stories told within the Apes films are nothing like Battlestar Galactica, the reimagining of the Apes narrative that began in 2011 is similar to the relationship the 2003 Battlestar had with its progenitor. Rethink a beloved but goofy-looking sci-fi franchise but keep the heart.

Instead of obsessing over the reoccurring human characters, the new Apes films take inspiration from the final two films of the original saga: Conquest of the Planet of the Apes and Battle for the Planet of the Apes, both of which posited that the antihero of these films was Caesar, not the humans. It was a bold decision, although the new Apes trilogy was smart enough to drop the time travel paradoxes and outlandish space travel (a lesson Tim Burton should have learned before tackling his dire 2001 remake).

Instead, by the time we get to War for the Planet of the Apes, the series has been transformed into a good old-fashioned post-everything dystopia. The setting is equal parts Mad Max and The Road, which is the polite way of saying it’s somewhat generic. But War for the Planet of the Apes uses the familiar sci-fi setting to double down on the realism. By the time of War’s release, audiences were no longer impressed with good CGI that allowed the apes to become the main characters of the story. Much is said about the talents of Andy Serkis, but whatever praise he receives doesn’t credit these films enough.

The story is pretty straightforward. The human race is dying out, mostly because of a plague. Caesar still kind of wants peace with the humans, but rogue apes are never going to be okay with that. Meanwhile, some humans have developed a bizarre syndrome that makes them act more animalistic. This revolutionary reversal is at the heart of the original novel by Pierre Boulle, and in some ways, although the plot of War for the Planet of the Apes is nothing like the original novel’s plot, the thematic core of this Apes feels the closest to that book out of any of the films.

The entire point of any Planet of the Apes movie is a giant, thudding analogy about the human condition. There’s a lack of subtlety throughout the Apes franchise, which is exactly why some films work (the 1968 original, Escape, Conquest) and some fall flat (Battle, the Tim Burton trainwreck). Each Apes movie has to decide just how hard it's going to sell the metaphor.

But what makes War for the Planet of the Apes so unique is that it barely tries for an allegory. Instead, it presents the notion of fully sentient apes as the status quo and then unpacks all of that as realistically as possible. Instead of encouraging the audience to think of the apes as metaphors for humans, the movie actually succeeds at making you think of them as what they are: intelligent apes.

None of the characters, Caesar included, get quite enough screen time to feel fully realized, and so all the naturalistic groundwork of the film gets swallowed by movie-stakes plot bulldozing. At the risk of evoking nostalgia for something no one remembers, it’s almost as if the best route for the Apes reboots wasn’t movies, but rather a TV series. But because the 1974 TV show wasn’t exactly anyone’s favorite version of the franchise, for now, we’ll have to settle for the reboot film trilogy.

War for the Planet of the Apes is in some ways a throwback to more straightforward science fiction that’s increasingly rarer these days. It’s an unpretentious film about a specific idea that digs deep enough to border on brilliance. Any social commentary or deeper messaging comes through organically. But while that’s happening, all you can do is worry about what will happen next. It’s the telltale sign of a solid blockbuster roller coaster, but one that falls just shy of the thematic depth that would’ve made it more memorable.

You can rent War for the Planet of the Apes on Amazon Prime.

More like this
Culture
8.3.2022 11:30 AM
10 years ago, the worst Philip K. Dick movie ever, pulled off something amazing
By Ryan Britt
Culture
8.4.2022 11:30 AM
You need to watch the most successful sci-fi thriller on HBO Max ASAP
By David Grossman
Entertainment
7.30.2022 2:30 PM
39 years ago, the biggest sci-fi bomb of all time changed the genre forever
By Ryan Britt
Related Tags
Share: