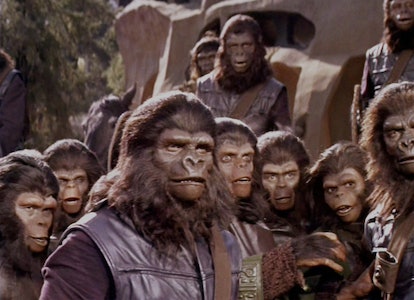 The newer films may have nailed the visual aesthetic of a simian-ruled Tomorrowland in a way the classics never could. But it’s the core of the original Planet of the Apes that makes it one of the most brilliant, innovative, and absurd sci-fi franchises ever. It’s also dark as hell.

Here’s why you should go ape and binge all five classic Planet of the Apes movies on HBO Max right now. But before you do, here’s what you need to know first.

If you’ve never seen any Planet of the Apes films, you might not know that there’s a huge twist hiding at the center of the first film, one that does not exist in the original novel. Suffice to say, the location and true identity of the titular “Planet of the Apes” is not always the same in every film.

Starring Charlton Heston as Taylor, an American astronaut suddenly marooned on a planet ruled by talking primates, Planet of the Apes presents one of the darkest science fiction premises ever. On this planet, sentient animals enslave human beings, perpetually punishing us for our various crimes against nature. This society of talking monkeys is no better than the classist, prejudiced world first created by humans. In the sequel — Beneath the Planet of the Apes — that there’s literally no end in sight to the cycle of death and destruction ultimately brings the characters underground, where a cult of mutants literally worship nuclear weapons as a merciful end to life’s suffering.

But on an academic level, the Planet of the Apes series made profound statements about slavery while making white moviegoers uncomfortable with parallels it drew to the Black experience. Gordon Briggs, a professor of liberal studies at the University of Rio Grande, has pointed out that in all the films — and specifically Conquest of the Planet of the Apes — we see “a marginalized group pushing back against the orthodoxy of the dominant group. And the dominant group pushing back.”

Added Briggs: “Science fiction is never about the future, it’s always about the present.”

The Apes films reflect the time period in which they were released, according to Briggs. He notes the films’ commentary on the Civil Rights Movement of the 1960s. The franchise’s popularity marked a subtle evolution in how American science fiction films were thought about by audiences.

While the more recent trilogy of Planet of the Apes films — especially 2017’s moving War for the Planet of the Apes — is separately worthy of praise, the dangerous flavors present in the older films haven’t since been recaptured. Perhaps that’s because, in today’s market, you can’t imagine a big-budget series of blockbusters daring to end in such dark places as each subsequent Apes film did. Without spoiling anything, these movies feature:

If all the Dune books reach the screen, there’s a chance those films could rival the complex darkness of the Apes films, given the mature content of Frank Herbert’s original books. But in the current climate of sci-fi blockbusters, it seems almost impossible to imagine any franchise going as dark as Planet of the Apes.

Contemporary science fiction cinema offers a glimmer of hope at the end of even the darkest of films. Back in the 1960s, this wasn’t expected or required.

The Planet of the Apes film series took a Twilight Zone-style horror premise and turned it into a series of movies that never let up in intensity. At the end of the first film, Taylor screams, “Damn you all to hell.” But who is he yelling at? His fellow humans? The apes? God?

Thankfully, these movies are too clever and too interesting to spell it all out for us. Despite the goofy rubber masks, the genius of The Planet of the Apes series is that it's subtle — and that’s saying something for a series of films about gorillas riding around on horses with shotguns.