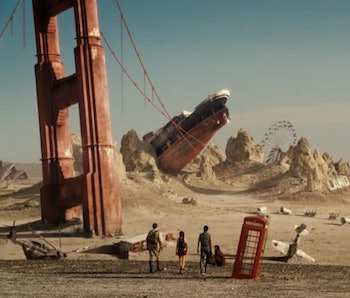 What if I told you there’s a science fiction movie you’ve never heard of in which two of the funniest comedians of the 21st century travel through space and time, save the multiverse from aliens, and get pooped out by a T-Rex?

You’re first thought might be: How do I watch this movie as soon as humanly possible?

Well, I’m pleased to inform you that Land of the Lost is streaming on Netflix as of October 1, but there’s a catch: I wouldn’t exactly classify it as a “great” movie.

Almost everyone involved in the production has disowned it. The producers of the original 1970s TV show this movie is (loosely) based on called it “one of the worst films ever made.” It has a Rotten Tomatoes score of just 26 percent. It received seven Golden Raspberry Award nominations and won Worst Prequel, Remake, Rip-off, or Sequel.

But the truth is, Land of the Lost is better than everyone seems to think. It might not be a great movie, but this 2009 sci-fi adventure-comedy is worth watching now that’s it on Netflix. Here’s why.

On September 7, 1974, Land of the Lost debuted on NBC. The series followed Rick Marshall and his children Will and Holly as they struggled to survive in an alternate dimension filled with dinosaurs, primitive ape-like “Pakuni,” and humanoid lizard monsters called the “Sleestak.” It might sound frightening, but Land of the Lost was a children’s show and featured a charming mix of live-action and stop-motion animation.

Directed by Brad Silberling (best known for 1995’s Casper and the Series of Unfortunate Events movie starring Jim Carrey), the film stars Will Ferrel as Rick Marshall (now a failed physicist), Anna Friel as Holly Cantrell (a doctoral candidate obsessed with Rick’s work), and Danny McBride as Will Stanton (a local burnout who tags along on the adventure). After Rick activates a time warp, the three of them get pulled into another dimension very similar to the one from the original show. They also immediately lose the sci-fi invention needed to get them back home.

From there, the plot unfurls like a series of comedy sketches loosely tied together by their search for that high-tech MacGuffin. There’s not much to the plot of Land of the Lost, but if you want to watch Will Ferrell drink dinosaur pee or Danny McBride trip balls with an intelligent monkey, this is the movie for you. (To be clear, I very much want both of those things.)

Ferrell and McBride are clearly having as much fun as possible given both the limited script and the movie’s over-reliance on CGI (all that charming stop-motion is long gone here). Unfortunately, Anna Friel doesn’t have much to work with at all. Her character manages to serve both as a straight man for everyone else’s antics and also an unlikely romantic interest for Ferrell’s pathetic protagonist.

The cast also includes Lonely Island member Jorma Taccone as Cha-Ka — the ape-like Panuki who joins the group — in a surprisingly solid physical performance. As an added bonus, Leonard Nimoy briefly shows up as a Sleestak to deliver a dire warning to our heroes.

Literally no sci-fi movie has ever been made worse by Leonard Nimoy’s involvement.

Ultimately, none of that helped. Land of the Lost made just $68 million at the box office on a $100 million budget and was almost universally panned. In 2011, the president of Universal Pictures (which distributed the movie) bluntly stated: “Land of the Lost was just crap. I mean, there was no excuse for it.”

But not everyone agrees. A year later, McBride defended the film:

“There are the purists, who I always read about, that are like, 'I can't believe you're raping my childhood.' If Land of the Lost is your childhood, and we're raping it, I apologize. I think the show is awesome, and I think [screenwriters] Chris Henchy and Dennis McNicholas keep the mythology intact without taking it too seriously. If it was taken too seriously, it's just Jurassic Park. We've seen that movie before. This is a more interesting take on that tone.”

In a sense, McBride is right. Not every reboot or remake needs to be a faithful adaptation of the source material (and not every piece of 20th-century sci-fi deserves a faithful adaptation). Land of the Lost is about as far from a perfect movie as you can get. But it’s still a fun time. And for a lot of Will Ferrel or Danny McBride fans, it’s probably also a piece of their legacy you’ve never seen before. If that’s the case, now’s the time to correct your mistake.

Land of the Lost is streaming now on Netflix.