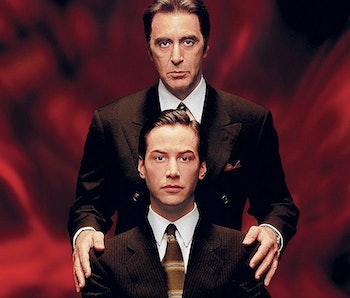 The 1995 O.J. Simpson trial radically changed the American perception of the justice system. The murders of Nicole Brown Simpson and Ron Goldman were lost amid the circus-like atmosphere of the trial, engineered by Simpson’s so-called Dream Team of lawyers. Johnnie Cochran, Alan Dershowitz, Robert Kardashian, and other high-priced counsels were able to change the conversation “as effectively as Donald Trump,” according to prosecutor Christopher Darden.

The OJ trial came during another cultural shift: Legal thrillers. The legal system has long been fertile ground for movies like 12 Angry Men and To Kill A Mockingbird. But by the 1990s, pushed by hot-selling novels by John Grisham and Scott Turow, the justice system became an action-packed thrill ride.

These trends culminated in The Devil’s Advocate, Taylor Hackford’s 1997 movie. Based on a 1990 book of the same name, momentum for an adaptation only came after the Simpson trial had ended. In both story and scope, it’s very much a 1990s movie.

Kevin Lomax (Keanu Reeves) is a big-talent lawyer in small-time Florida, representing pervy teachers and racking up wins. He’s never lost a case, even if his clients are guilty. He tries to be a good guy who loves his wife Mary Ann (Charlize Theron) and his mom Alice (Judith Ivey), and his reputation is spreading beyond the Sunshine State, specifically to New York.

He’s caught the eye of John Milton (Al Pacino), who runs one of the country’s top firms. He wants Kevin to run a criminal division, and he’s running a full-charm offensive to get him there. Kevin and Mary Ann are given the world: An incredible three-bedroom home in Manhattan, a huge salary, and entry into upper crust society.

The catch is that Kevin will be working pretty much nonstop. Milton lives right above their gorgeous apartment, and he’s constantly dropping by. When Kevin isn’t working to free millionaires, he’s being taken to parties. He tries to bring Mary Ann along, but she gets dumped off onto the wives of other lawyers, all of whom rejoice in their spousal solitude and the fancy clothes and plastic surgery that come with it.

The shallowness of Mary Ann’s new life is driving her crazy. Meanwhile, Kevin becomes obsessed with the firm’s latest case, clearing a rich construction magnate Alex Mullen (Craig T. Nelson) of a triple homicide. He spends more and more time on it, pushing against Milton’s request that he focus on his failing marriage. Kevin decides to institutionalize his wife instead, especially after she claims that Milton assaulted her on a day Kevin knew he was in court.

There’s nothing subtle in The Devil’s Advocate, a movie which gives away the twist in the title. How is Milton so charming? How does he know so many languages? How does he seemingly predict which company employees will die? Well, he’s not quite human. As emphasized in a church where his touching holy water makes it sizzle and steam, he’s Satan himself.

The movie is a great chance to see pre-Matrix Keanu, who in two years would step out of his pigeonholing in the 1990s as a handsome face. He’s good here, although the person clearly having the best time is Pacino. While everyone else is panicking and running around, Pacino is dancing on tables and laughing. Satan suits him well.

There are plenty of Biblical references in the movie, but Hackford makes sure to focus on the material pleasures tempting Kevin and Mary Ann. We see their apartment, we see their bodies. Hackford wants to tempt viewers into their lives, then let them see the true cost. It’s not a subtle movie, but it is a fun time.

The Devil’s Advocate is streaming on Netflix until May 31.