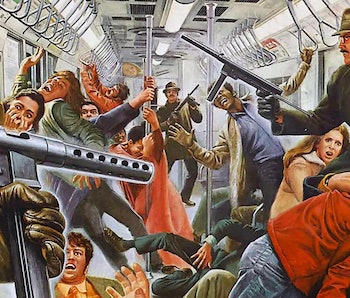 If you want to start a tedious argument, hop online and suggest the book was better than the movie. Whether you’re talking Dune or Gone Girl barely matters. The subject is a pop culture bug zapper, dazzling anyone foolish enough to be drawn towards it.

Some zealots in this forever war will argue that books are always better, but this literati line of thinking forgets how many of yesteryear’s bestsellers have been consigned to the dusty corners of used bookstores. Who remembers that Die Hard, Jaws, Rambo, and Who Framed Roger Rabbit began life as pulp paperbacks?

John Godey, who wrote potboilers with stupendous titles like Never Put Off Till Tomorrow What You Can Kill Today, was paid a cool $450,000 for the rights to The Taking of Pelham One Two Three, a 1973 novel that’s now distinguishable from countless other thrillers only by its casual use of racial slurs. But the movie that followed a year later seizes your attention from the moment its brassy opening credits start pounding your ears.

“Millions have read it... now you can live it!”

Pelham One Two Three is what Die Hard or Speed would look like if there was no beefcake übermensch on hand to save the day. After four men seize a New York City subway car and demand a quaint $1 million, the closest we have to a hero is Walter Matthau’s phlegmatic Lieutenant Garber, a transit cop who reacts to the hijacking like the deli mishandled his lunch order. Pelham was released during the golden age of skyjackings, and the idea that criminals or radicals would give a subway car a shot was considered credible enough that the Metropolitan Transportation Authority initially refused to aid the production.

But this is no tawdry shoot ‘em up. Garber wields a gun but never fires it, and Pelham as a whole is impressively restrained with its violence for a movie released the same year as fellow literary adaptation Death Wish. Instead, Garber spends most of the film in and around a dispatch office chair, negotiating with Robert Shaw’s polite but ruthless Mr. Blue (Tarantino would later lift the color-coded criminals for Reservoir Dogs).

Blue’s inflexible insistence that hostages will be iced if the money doesn’t arrive in an hour ratchets up the tension, as city hall politics, New York traffic, and the sheer logistics of getting the cash together all work against Garber. Also adding to the intrigue is the looming question of how the villains, trapped underground and surrounded by police snipers, intend to escape from a seemingly inescapable situation. It’s easy to make a movie where the villains hold all the cards, but here the good guys have all the real power; it would just be irresponsible to use it.

One of Garber’s colleagues does suggest simply storming in and shooting the bastards, and a lesser movie would do just that. But Pelham, despite its sensational premise, is more interested in how a bunch of workday shmucks come together to muddle through a bad day on the job. Sure, everyone wants to save the lives of the hostages, but they also don’t want fingers pointing at them if the whole affair goes sideways. When shots finally are fired, you can see Garber tense at the thought of his long day becoming longer.

All movies eventually become period pieces, and part of Pelham’s delight today is in getting a glimpse behind the scenes of an analog New York. From the police pinboards to the dispatch room’s giant microphones it all feels documentarian, at least until you realize the hijackers claimed a subway car conspicuously free of graffiti. Pelham’s age also dates it in places (bit actor Gary Bolling gets the credit of a lifetime as “The Homosexual”), but it’s intriguing to see plot points relevant to the era; our heroes struggle to keep long and winding lines of communication open, and cash-strapped New York politicians wonder if they can afford the ransom at all.

It's also a refreshingly breezy film, from the tight runtime to the witty dialogue. Most of the latter is tossed off so casually you barely notice it, a reprieve from the lumbering execution of gags in modern action movies.

In the end, the case isn’t closed with a dramatic shootout, but detective work based on rote filing performed by anonymous bureaucrats dutifully working away offscreen. It’s an amusing anticlimax that would be difficult to sell today, but it’s a fitting underline of the message that one man’s harrowing encounter with terrorists is another man’s overtime bill. The 2009 remake, starring Denzel Washington and an expired John Travolta, swapped the flatfoot ending for what was supposed to be a harrowing, high-stakes confrontation, which merely sunk the film into the mush of forgotten boilerplate thrillers.

Pelham takes pains to emphasize that Garber is an officer in the New York City Transit Police, a department that was dissolved in 1995. It’s fitting that his character couldn’t exist today, because this style of big-budget thriller couldn’t either. That’s probably for the best when it comes to side characters griping about having to work alongside women. But we do lose something when the modern box office formula demands a hero who has to shoot the villain instead of sending him a smile that says, “I outsmarted you, and now I can finally go home.”

The Taking of Pelham One Two Three is streaming on HBO Max.