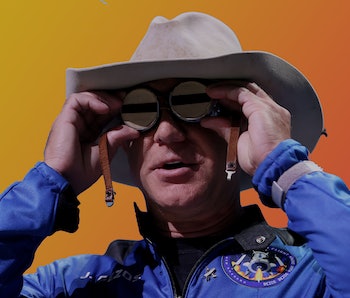 A tsunami of dunks arrived in the wake of Jeff Bezos’ 11-minute rocket ride in a questionably shaped New Shepard launch vehicle earlier this week.

It seemed that large percentages of highly-online people were of the opinion that the world’s wealthiest man had just squandered enormous amounts of cash on a pointless joyride and that the reportedly $10 billion he’s invested so far in Blue Origin, his aerospace company, could have been better spent elsewhere.

Even reporter Soledad O’Brien got in on the pessimistic hot takes:

The question is, did Bezos and Blue Origin miss an opportunity to better shape the narrative around their media event? And, if so, what could they have done?

Revelations that Bezos might only pay a true tax rate of 0.98 percent — far less than the average American — and his moves to squash unionizing efforts at his company Amazon, certainly didn’t help the matter. The cowboy-hat-wearing CEO’s own comments thanking “every Amazon employee and every Amazon customer, because you guys paid for all of this," were similarly tone-deaf, drawing condemnation from U.S. Representative Alexandria Ocasio-Cortez, among others.

But in some ways, those issues are orthogonal to the matter of what kind of value a suborbital flight like Bezos’ can bring to the world.

To put it another way, there is one tweak that Bezos could have made to improve the public’s perception of space travel and science, which undoubtedly took a severe beating because of his clumsy approach.

It’s something that Elon Musk — who is, no doubt just as big a huckster as Bezos — does with ease, and claims an army of space-loving fans because of it: Musk merely often explains there’s a larger purpose at play than just a rich boomer going to space.

The technology developed for the dick-shaped rocket can be used for good here, and the scientific discovery and research that tech may enable is potentially good for all humanity.

“People didn’t understand why it was important that commercial companies replicate something government did decades ago,” Laura Forczyk, owner of the space consulting firm Astralytical, tells Inverse.

“I like to talk about how money spent in space isn’t really spent in space; it’s spent on Earth. All the technologies created in spaceflight are useful to society.”

Forczyk saw the jaunt in terms of its potential for scientific discovery. New Shepard has already carried experiments for universities, NASA, and private companies on previous uncrewed flights and intends to continue to do so. Along with Richard Branson’s Virgin Galactic, which has also started taking experimental payloads into suborbital space, a larger market could develop for research opportunities in this region, Forczyk says.

Yet Blue Origin’s ham-handed attempts at self-promotion haven’t always been the finest. The company, which did not respond to a request for comment from Inverse, sent what appeared to be an extremely petty tweet aimed at their competitor, Virgin Galactic, shortly before the latter’s launch a week earlier:

“They were perhaps trying to point out, from a marketing standpoint, that their product and service had superior features,” Chris Lewicki, an engineer and space entrepreneur, tells Inverse. “In retrospect that was clearly a bad idea.”

Lewicki thinks that the misstep was relatively minor and likely to be soon forgotten. “But it creates a bit of a predisposition for people to be less receptive to the message that follows,” he said.

Perhaps Blue Origin won’t ultimately pay much of a price for such lapses in judgment. Research has shown that even negative word-of-mouth can increase public awareness of a brand and help sell goods, Jessie Liu, a marketing professor at Johns Hopkins University, tells Inverse.

“Compared to [Elon Musk’s] SpaceX, Blue Origin was born with far less hype and publicity in the game of space travel,” she writes via email. “So even criticism about Jeff Bezos that gets people to talk about Blue Origin and create awareness is not necessarily a bad thing for the company.”

There might be an opportunity for the aerospace company to identify and covert the most engaged consumers through negative word-of-mouth, Liu added, since such comments tend to stem from people’s emotional investment, and passion can lead to activity.

Though he understood where some of it was coming from, the negative commentary frustrates Lewicki: “There seems to be a lot of attention on two or three individuals, and a wish that they shouldn’t be that wealthy or that they should be using their wealth in some different way.”

Both he and Forczyk point out that the fact that Bezos and other billionaires aren’t paying as much as they might to the U.S. government in taxes is more a matter for legislators to try to solve, and that Bezos is taking active steps to donate parts of his vast wealth to causes he deems valuable.

“For me, it’s an opportunity for self-reflection,” says Lewicki. “If I’m complaining that Bezos isn’t using his resources to charitably solve problems, then how do I rank up with using my time?”

For us standing at this moment in history, it can be hard to know what future results will come from something like this first passenger launch of New Shepard. Comparing Blue Origin to Amazon, Lewicki says that Bezos seems particularly adept at creating never-before-seen kinds of infrastructure to, say, routinely deliver packages quicker than anyone thought possible.

In the end, the haters are going to say whatever they want about Bezos and his pursuits. It’s possible (probable, even) that even if Bezos was clear about the loftier ambitions of Blue Origin — “millions of people living and working space” is the tag line — the launch would still be received poorly.

But the billionaire’s passion for space travel is deep-seated, and Lewicki says Bezos has personally told him he’s never planning to give up on that dream.

“Right now, the message he’s talking about is building the road to space,” he said. “That’s the theme he’s employing.”

Advocates for space exploration and the advancement of science and technology can hope that the road to space is a well-thought-out one, with the no-good optics and naked commercialism of this past week’s 11-minute flight quickly replaced with efforts that more clearly serve the greater good.