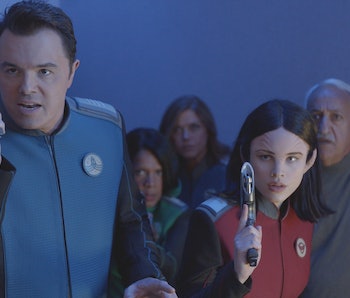 As a sci-fi copycat, The Orville will either go down in history as an unlikely and transgressive success of a TV series or as a unique — if confusing — curiosity.

Unlike nearly every other science fiction show in the 21st century, The Orville began as an intentionally, brazenly unoriginal series. When it debuted in 2017, it risked being utterly misunderstood.

However, where The Orville started is not indicative of what the TV series would become. Five years later, its evolving legacy is odder and harder to pin down than perhaps any other sci-fi phenomenon of the last 20 years. But let’s give it a try.

(At the risk of making everyone mad, of these three viewpoints, the third one is the most fun at parties.)

You may have noticed those first two options are inextricable from Star Trek — an element of the series that is not only completely intentional but baked into The Orville’s very DNA. Joining MacFarlane on this TV quest is a slew of Star Trek actors, designers, directors, and producers, including André Bormanis, David A. Goodman, Jonathan Frakes, Robert Picardo, and producer Brannon Braga.

Braga is the very talented writer/producer who worked on all the Star Trek series from The Next Generation through Enterprise and who co-wrote at least one TNG-era movie you probably love. (Hint: It’s First Contact.)

MacFarlane recreated the exact feeling and style of the Next Generation/Deep Space Nine/Voyager/Enterprise Trek-era by collaborating with a bunch of the very influential writers and producers from those shows. Nobody wonders why the jokes on Curb Your Enthusiasm feel like Seinfeld because everyone knows Larry David co-created Seinfeld. Because of the presence of those Trek veterans, The Orville is pretty much the Curb to the Seinfeld of ‘90s Star Trek.

When The Orville premiered in 2017, it was famously panned by critics (myself included) and loved by a network TV audience. Five years later, with three complete seasons of The Orville out in the world, it’s fashionable in geek circles to say, “Yeah, I was wrong about The Orville. It’s good.”

But that’s not exactly true. The debut episode, and much of the first season of The Orville, is still very bad and borderline unwatchable. To a Star Trek fan, The Orville pilot scans like a remix of The Next Generation if Riker was the captain of the Enterprise and Troi was his first officer who had an unsavory affair with an alien.

You could say, as many critics did at the time, that everything about this is done in slightly poor taste to the point of making it not funny. Relative to the “quality” of the rest of the show, The Orville pilot seems even worse.

In 2022, The Orville: New Horizons is barely the same show we first glimpsed in 2017. As the most successful sci-fi fan film series of all time, The Orville has proven most of the haters wrong, but only by doing less of what the haters didn’t like in the first place.

In other contemporary sci-fi comedies, embracing high-concept ideas in a Trek format is very possible without resorting to the jarring tonal discordance of early Orville. (See: Paul Feig’s Other Space and Star Trek: Lower Decks for proof.) But The Orville’s gradual pivot toward being more serious was how it found its soul. In fairness to MacFarlane, this pivot was probably baked into the design. In 2019, MacFarlane admitted that at the very beginning, Jon Favreau told him to “trust what you have” and not to rely so much on humor.

To put it another way, The Orville only “got good” as it gradually stopped being risky and raunchy. When The Orville shifted from a Star Trek-comedy fusion to simply a Star Trek show, it became more consistent and more honest. The safer version of The Orville is what we have now, with Season 3 and much of Season 2, and that’s the reason the show is better.

From a purely intellectual standpoint, this doesn’t make much sense. How can a previously transgressive thing actually become less transgressive (and more derivative) but somehow create better art?

Honestly, I don’t know, but you have to hand it to Seth MacFarlane. The Rotten Tomatoes score for The Orville skyrocketed in 2022 and, unlike back in 2017, that mostly represents a shared reality between critics and mainstream audiences. It’s not the new Babylon 5, and it’s certainly not even close to touching the brilliance of The Expanse and For All Mankind (two other big sci-fi shows that have former ‘90s Trek writers behind the scenes.) But now we all agree: The Orville is mostly fine.

If The Orville should be given one accolade, it’s perhaps for making that amazing union happen.

The Orville is are streaming now on Disney+.

More like this
Entertainment
Sep. 24, 2022
5 years ago, the most pivotal sci-fi franchise ever made a crucial comeback
By Ryan Britt
Culture
Sep. 26, 2022
40 years ago, an iconic sci-fi show had a bizarre beginning
By Ryan Britt
Entertainment
16 hours ago
Andor Episode 4 release date, time, plot, cast, and trailer for the Star Wars show
By Jeff Spry
Related Tags
Share: