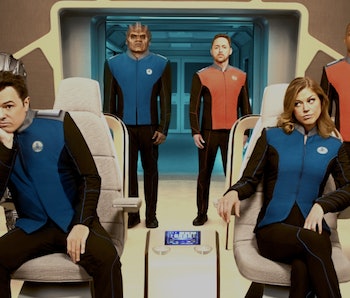 As each member of the outer-space crew of the starship Orville is introduced, Seth MacFarlane’s Captain Mercer notes the robotic crew member Isaac comes from a species of robotic AIs known as “legendary racists.” For a brief moment, a great sci-fi joke was almost made. “My planet regards humans and all other biological life as inferior,” the robot responds. And then nothing happens.

Right here, The Orville could have smartly subverted the holier-than-thou, enlightened human trope and the fantastical anti-alien bigotry from the original Star Trek. But instead, the show blasted by that opportunity at warp speed. The Orville forgot what made ‘60s-era Trek smart and funny in the first place.

The first episode of the new Fox sci-fi space comedy The Orville is called “Old Wounds.” This is probably a reference to a line in The Wrath of Khan about Kirk’s old girlfriend, but it’s really a harbinger for the confused message of the entire show. The Orville can’t decide if it wants to be a Star Trek-spoof in the tradition of Galaxy Quest, a rude-humor machine like MacFarlane’s Family Guy and Ted movies, or just a passably watchable Star Trek rip-off that somehow has less humor than the original Star Trek. More often than not, it settles on that last one.

Something Trek spoofs always forget is tons of episodes of the original ‘60s Trek ends with everyone standing around on the bridge laughing their asses off. Seriously, go to Netflix right now, and fast forward to the last scenes of original series episodes. You’ll be shocked by how many of them end in everyone laughing or someone making a joke. There are notable exceptions (“City on the Edge of Forever” springs to mind) but Kirk, Spock and Bones sparring philosophically about human nature and having a giggle — usually at Spock’s expense — is a huge cornerstone of what made the original Trek work.

And a lot of this relied heavily on Bones being racist about Spock’s half-human/half-Vulcan heritage. So, when The Orville introduced Isaac’s superior attitude about being a robot as “racist,” smart Trek fans were probably reminded of all this stuff. But the joke just didn’t go anywhere.

Here’s why that’s really a shame. For all the credit Star Trek gets about being open-minded and progressive, it usually presented those messages right alongside its own indigenous stereotypes. Sure, the entire diversity of humanity was explored and represented, but the rest of the franchise spent 50 years by creating alien races defined by one essentialist trait. The Klingons are all warlike. The Romulans are all shifty. The Ferengi are all sexist greed-monsters. And on and on. True, with every single alien race, Trek occasionally would present exceptions to these rules — for example, Rom, on Deep Space Nine was a nice, almost feminist Ferengi — but too often this was presented as those characters embracing more human ways of thinking and rejecting their own, flawed culture. The writing always had the various alien races operating at a deficit.

Despite seeking out new life and new civilizations, the message of a lot of Star Trek was usually, “yeah, the humans know better and everyone else has a backwards way of living.” Captain Kirk was habitually paternalistic about telling aliens they were doing everything wrong. Spock occasionally would get some digs back on the humans, but for the most part the message of Star Trek in regard to “other” life is this: robots and aliens are fucking nuts.

So, when MacFarlane’s Captain Ed Mercer accuses the robot Isaac of being “racist,” The Orville could have flipped the script. Instead of robots and aliens being boxed into one mode of behavior, Isaac could have pointed out that Ed Mercer was racist for assuming all of the robots from Kalon I were the same. Instead, Isaac just sticks to some rote sci-fi dialogue about robots acting superior to humans. Maybe The Orville will do something with this character and concept later, but as it stands, his exchange with Mercer is a less funny version of Spock and Bones’s jabs at each other, and it just reinforces old sci-fi cliches about “the other.”

Through the rest of The Orville’s first episode, various other Trek tropes are retrofitted with MacFarlane style-humor. Captain Mercer’s first officer is his ex-wife, which seems to be a reference to Commander Riker and Counselor Troi working together on the Enterprise in The Next Generation. But, the Riker/Trio thing was always weird and unprofessional on TNG. If The Orville is attempting to skewer that, it’s not working. What was with that joke about a “Macaroni man?”

Toward the end of the episode, a shuttle-pod needs to land in the hangar bay of The Orville while the ship is moving around a bunch. This seems to reference a scene from Star Trek V: The Final Frontier where Sulu has to land a shuttlecraft manually under similar duress. The Final Frontier is considered to be the worst Trek of the classic films, and yet, the scene in which Sulu, Kirk and Scotty joke about “emergency landing plan B” is funnier than the “hugging the donkey” joke on The Orville. But, because the visual effects in The Orville are actually kind of good, it’s unclear if you’re supposed to be laughing during this scene or not.

In fairness, this might be the one thing that is so hard to duplicate about the original Star Trek. Somehow, even in its worst movie, classic Trek was capable of delivering real suspense and real humor in the same scene. All this proves is that maybe the best way to do a sci-fi comedy is just to put some jokes in a really good sci-fi show. Meanwhile, perhaps Seth MacFarlane should leave his fanboy homages in his cartoons.

The Orville airs on Sunday nights at 8pm EST on Fox.

See also: How to Watch Star Trek: Discovery Streaming Around the World.