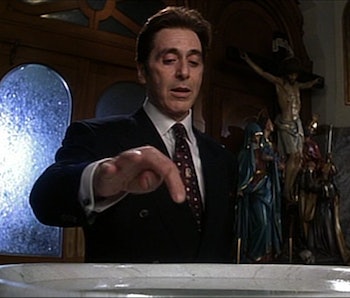 A lawyer approaches a scared teenage girl who’s on the stand, testifying against a teacher she’s accusing of sexual assault. She’s just described how the teacher got her alone and touched her, and the lawyer knows she’s telling the truth. But he eviscerates her, bringing up nasty notes she passed in class, a party she held without her parents’ permission, her sexual experimentation with peers. She sobs and pleads, but he just sneers. His client walks free, and the lawyer heads to a bar to celebrate.

After witnessing that, it’s not hard to believe that lawyers are pure evil. The title of The Devil’s Advocate is a cheeky bit of wordplay, but even before Satan himself shows up, there are plenty of reasons to take it literally. If the man that defense attorney Kevin Lomax (Keanu Reeves) just helped escape justice isn’t the actual devil, he comes close. Kevin experiences a flicker of doubt as he looks at himself in the courthouse bathroom mirror, but his hesitation only lasts a few seconds before he proceeds with his ruthless strategy. This is the protagonist the audience is supposed to sympathize with?

Despite defending an unrepentant child molester in the opening scene, Kevin never comes across as irredeemable, although his corruption by New York City legal kingpin — and human incarnation of Lucifer — John Milton (Al Pacino) is fun to root for. The Devil’s Advocate is an over-the-top morality play, but Milton is so charismatic and convincing that he counteracts any potential lessons about humility and righteousness. Pacino is having such a good time that he can’t help but bring the audience along.

Director Taylor Hackford takes his time bringing Pacino onscreen, first establishing Kevin’s life as a hotshot attorney with an unblemished record of wins in Gainesville, Florida. Kevin’s wife, Mary Ann (Charlize Theron), cheers on his dubious victories, downing shots with him at the bar. Her job is less lucrative but equally shady, tracking down owners who are late on car payments and repossessing their vehicles. It’s no wonder they seem like easy targets for Milton’s fancy NYC firm, whose representative recruits Kevin to consult on jury selection.

Once the Lomaxes get a taste of New York luxury they don’t want to leave, and that’s when Milton swoops in and makes Kevin an offer to join the firm full-time, complementing their corporate work by establishing a new criminal defense division.

Even if Milton weren’t Satan in the flesh, he’d still be sinister, and Hackford playfully surrounds him with 1997’s signifiers of white-collar evil, from Middle Eastern oil barons to Republican congressmen to Don King, playing himself. When Kevin lands the firm’s first major criminal case, it’s the murder trial of a mogul so Trumpian that the movie used Donald Trump’s actual gold-encrusted apartment as the shooting location for the character’s home.

As Kevin becomes more immersed in the firm’s high-stakes business, he neglects Mary Ann in ways familiar from plenty of movies about distracted husbands whose bosses aren’t Satan. Holed up in the couple’s massive corporate-owned luxury apartment, Mary Ann starts to resemble Mia Farrow’s character in Rosemary’s Baby, and not just in the stylishly short haircut Milton suggests she adopt. She’s more attuned to the warning signs than Kevin is, and she sees malevolence in the solicitous friendship of the wife of Kevin’s colleague, who lives next door.

Theron brings more sensitivity and nuance to Mary Ann than just a standard helpless wife, and there’s a somewhat forward-thinking aspect to her eventual accusations of sexual assault against Milton, who of course has the perfect alibi because he can be in two places at once. Reeves balances arrogance and honesty in his portrayal of Kevin, who never loses his aw-shucks Southern accent. But the movie belongs to Pacino, who is doing some of the greatest overacting of his career.

Pacino’s hamminess is often misplaced, but it never fit a movie more perfectly than it does in The Devil’s Advocate. Milton has two long monologues that lay out his hedonistic theology, and Pacino digs into each one with every ounce of energy and enthusiasm he has. His final big speech to Kevin, revealing his motivations and making a pitch for his worldview, is a masterclass in scenery chewing, and somehow it includes Pacino dancing and lip-syncing to Frank Sinatra’s “It Happened in Monterey.”

Kevin may harbor lingering doubts, but anyone watching the movie will be eager to join Milton’s crusade. When he delivers the line “Vanity is definitely my favorite sin,” Milton is talking about Kevin’s pride, but it could easily be Pacino talking about Pacino, and the movie is better off for all of Pacino’s vanity. The filmmakers opt for a cheesy Twilight Zone-style ending that’s a bit of a cop-out, but everything leading up to it is a devious delight.