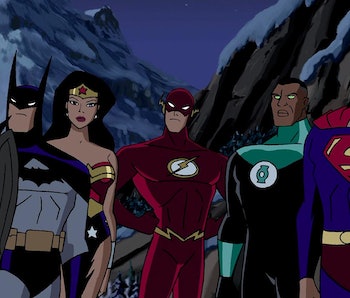 Once upon a time, it felt like the World’s Finest ruled the big and small screen. You couldn’t turn on a TV or walk into a movie theater without running into the next adventures of the Caped Crusader or the Man of Steel. Every weekend, Wonder Woman fought alongside Superman and Batman. Green Lantern was Black. The Justice League was a Saturday morning cartoon staple.

But those halcyon days of DC are long gone, and Warner Bros. is preparing to start a new era under the watchful care of James Gunn and Peter Safran. Unfortunately, it seems this new era doesn’t have the affection for that golden age of early 2000s superhero cartoons that most millennials who grew up watching Justice League have.

In late December 2022, it was announced that Justice League — alongside beloved animated DC shows Justice League: Unlimited, Batman: The Brave and the Bold, and the ‘60s Aquaman — was going to leave HBO Max on January 31. As of now, there’s no new streaming home for these shows.

These are not the first titles to fall victim to the chaos following the Warner Bros. Discovery merger. HBO Max original titles have vanished without warning from the streaming service, while even former HBO hits found themselves vulnerable to the streaming chopping block. But it’s a shame, as Gunn and Safran prepare to reboot the DC Universe without doubling down on a million Batman movies, that the best blueprint for a rich superhero universe might disappear from streaming altogether.

When Justice League debuted on Cartoon Network in 2001, it was already part of a rich TV legacy started by the game-changing Batman: The Animated Series. Superman: The Animated Series and The New Batman Adventures were established hits, and the Timm-verse — as the franchise was called, after creator Bruce Timm — was thriving. Still, Justice League was a bit of a gamble.

While Timm and company had played with team-ups before in crossovers between Batman: The Animated Series and Superman: The Animated Series, a DC superhero team of this size hadn’t been seen on the screen since the long-running Super Friends. Timm was keenly aware of Super Friends’ goofy reputation, and was hoping to avoid such associations; his shows might not be as grim-dark as recent DC movies, but neither were they as campy as the cartoons of the ‘70s and ‘80s.

The magic of B:TAS and S:TAS was that they took their worlds seriously, whether those worlds were heightened neo-noirs stalked by psycho clowns, or bright retrofuturistic metropolises terrorized by midget tricksters. Timm was notably reluctant to make a Justice League show despite fan demands — for nearly five years, he insisted it would have too many characters and be too “unwieldy” to produce. But after testing out a futuristic Justice League team in an episode of Batman Beyond, a proper Justice League show seemed feasible.

In all honesty, the two seasons of Justice League are mostly pretty okay. They never reach the envelope-pushing heights of Batman: The Animated Series or Batman Beyond, nor the cozy familiarity of Superman: The Animated Series. Batman’s ears were too long, and Superman had sharp cheekbones that made him look gaunt. The show was at its best when it took us on one-off adventures with the core gang, or when it transformed into a slice-of-life show about the superheroes on their downtime.

Justice League was the beginning of the hardcore serialization of the Timm-verse, with larger arcs starting in the show and spreading out through its many sister cartoons. Those episodes, oddly, feel the most skippable. But what Justice League and its sequel series Justice League: Unlimited did best was expand the vast, rich world our favorite characters inhabit. It was a toybox to make superpowered characters fight like ‘50s-inspired action figures, but also for comic books to turn into wild soap operas. Batman and Wonder Woman flirted, John Stewart and Hawkgirl fell in and out of love, Superman and Batman were guys being dudes, the Martian Manhunter yearned for humanity, the Flash was just the best.

Justice League gave us awesome fights and cool crossovers, but it also cared deeply about its characters. It should still be the blueprint for the floundering DC live-action movies, instead of being purged from the streaming airwaves.