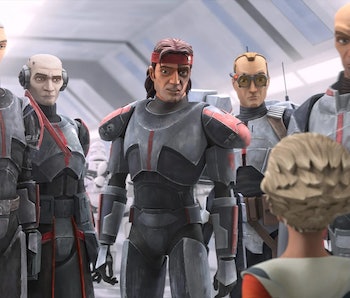 Imagine there’s no Jedi. In all versions of Star Wars canon — from the current canon to Legends — the Jedi have been around for at least a thousand generations. Nearly everything we know about Star Wars history starts with the Jedi.

But what about before all that? An even longer time ago in a galaxy far, far away, there was a time in which the Jedi did not exist, and The Bad Batch just teased the idea that the landscape of the galaxy was very different. At one point, “ancients” who predate the Jedi ruled over everyone and everything. Spoilers for Bad Batch Season 2 Episode 5 ahead.

In “Entombled,” the Batch are led on a hunt for ancient treasure with their pirate ally Phee (Wanda Sykes). A random compass scavenged by Omega leads them to the Kaldar trinary system, which Phee thinks is the site of a mythical treasure called “Skara Nal.” In the end, everyone learns the hidden treasure is actually a giant killer robot with the ability to raze the surface of a planet, sort of like if an AT-AT were merged with Death Star tech.

We don’t learn much about who built this ancient thing, or exactly what time period it comes from. But Phee does propose a tantalizing theory that’s rarely explored in Star Wars lore. As the Batch is about to enter a hidden passageway, Tech notes some etchings are “easily a thousand years old.” Phee corrects him, saying, “older, much older.” Phee then says the legend of Skara Nal “traces back to the ancients.” Echo says, “You mean the Jedi?” Phee says, “No, older.”

The timeline of the Jedi

What is older than the Jedi? In the old Legends canon, the Jedi arose from an even older sect called “Je’daii,” who existed on Tython around 36,453 BBY. Derived from Dark Horse comics and novels, the story of the Je’daii is not currently canon. But in 2016, Doctor Aphra made the planet Tython canon, and then in 2020 the planet appeared in The Mandalorian Season 2. So we can assume that some of the Jedi backstories from Legends still count, at least when it comes to the timeframe we’re dealing with. Current canon tells us the “first” Jedi Temple on Ahch-To was built tens of thousands of years before the prequels.

But Phee suggests an entirely different status quo before all that. The “ancients” could refer to a lot of things, but even in Legends canon we don’t have a good idea of what the galaxy was like before the Jedi. All deep-history Star Wars stories have tended to focus on the earliest forms of the Jedi. Obviously, at some point the galaxy didn’t have Force users, but that ancient history has been largely unexplored. The upcoming live-action Star Wars series The Acolyte is set to take place about 1,000 years before the prequels, but relative to the deep-time history Phee is alluding to, that’s a drop in the bucket.

The Bad Batch’s reference to “ancients” who predate the Jedi is vague. But the artifact from this time — the robot planet razer — is very specific. Clearly, at some point way before even the most rudimentary Jedi, other forces waged war in the galaxy. It may be a small reference, and we may never get more clues about this period. But this single scene suggests that space wars were happening long before we previously imagined, which could open up a whole new world of possibilities for Star Wars.

The Bad Batch streams on Disney+.