“No such thing as a happy ending.” 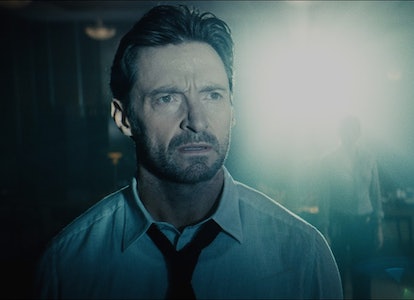 Hugh Jackman is a Jack(man)-of-all-trades. He’s a song and dance man, as we see in The Greatest Showman and his current stint on Broadway in The Music Man. He’s also a captivating action star, as evidenced by his career-long portrayal of Wolverine in a whole heap of movies. Now he’s taking his signature role to Deadpool 3, allowing him to combine all the stabbing with some broad comedy.

Last year, however, Hugh Jackman made a movie unlike anything else he’s been in. More miserable than Les Miserables, and more prestigious than The Prestige, Reminiscence is essential for any Jack-fan.

Calling Reminiscence a neo-noir movie is an understatement. It’s set in a future where climate change has flooded the coast of Florida, turning Miami into a half-sunken underworld. The sun is so hot that society now runs nocturnally, letting the entire movie take place in an eternal twilight that only adds to its atmosphere.

Hugh Jackman plays Nick Bannister, who describes his futuristic job with the ominous narration, “Memory is the boat that sails against [time’s] current, and I’m the oarsman.” People come to the business he owns with his friend Watts (Thandiwe Newton) to relive memories. Nick talks them through the journey to keep them from being “burned” — trapped in the same memory loop for eternity.

Like all good noir stories, Reminiscence begins with a mysterious bombshell walking through the door. Mae (Rebecca Ferguson) seems harmless enough — she’s just looking to figure out where she left her keys — but Nick becomes entranced, and the two have a passionate fling. When she disappears, Nick starts obsessively reliving his memories with her. Eventually, he goes down a rabbit hole to uncover Mae’s true nature, her motives, and her role in a massive conspiracy.

Reminiscence leans hard on its noir element, basing its conspiracy thriller on a foundation built by movies like The Maltese Falcon and The Manchurian Candidate. Writer and director Lisa Joy, best known as the co-creator of Westworld, leans on her knowledge of game-changing twists, leaving you questioning every character’s motives until the last second.

Reminiscence never reduces to a simmer. It feels like watching an entire season of television, for better or worse. But in the last scene, the true message of the movie hits you hard. This isn’t really about a conspiracy theory; it’s a parable about people so stuck in the past that they don’t realize what’s going on around them.

Reminiscence is the sci-fi neo-noir to end all sci-fi neo-noirs, and the conversation stopper to the question, “Is the conspiracy thriller dead?” Most of all, it’s the ultimate showcase for Hugh Jackman, who conquers an incredibly complex character with an ease that makes you buy into his inner monologue. Once you try out this heart-stopping thriller, it’ll be an experience you’ll never forget.

Reminiscence is streaming on HBO Max.