“The line must be drawn here!” 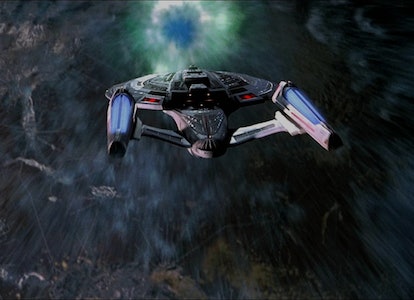 An action-filled Star Trek movie opens at the top of the box office and receives praise from critics, reaching an audience beyond devoted Star Trek fans and delivering an effects-driven spectacle. It’s not one of the movies from the J.J. Abrams-led reboot trilogy, though. Released in 1996, it’s the second big-screen adventure for the cast of Star Trek: The Next Generation, firmly establishing that Star Trek can thrive on the silver screen without the stars of the original series, and setting the subsequent course for both the Abrams movies and the current Star Trek streaming shows.

Star Trek: First Contact, which just hit HBO Max, still holds up as a franchise high point, and its themes and narrative threads have resonated through recent episodes of Star Trek: Picard and Star Trek: Lower Decks. It’s the best movie to feature the Next Generation cast, balancing character development with an epic battle against a formidable enemy. The Borg have become a bit less threatening in their subsequent appearances on Picard, but in First Contact they’re terrifying, the closest that a Star Trek alien race has ever been to horror-movie monsters.

Like another excellent Star Trek movie, 1982’s Star Trek II: The Wrath of Khan, First Contact builds on plot elements from a TV episode, opening with a flashback to the time Jean-Luc Picard (Patrick Stewart) spent assimilated by the Borg collective. Picard’s abduction still haunts him, so when the cybernetic aliens mount a new attack on the Federation, he’s furious that the Enterprise is ordered to stay out of the action. There’s real anguish on the faces of Picard and his crew as they listen to transmissions from outmatched Starfleet vessels. Of course, Picard disobeys orders and heads for Earth.

Once there, the Enterprise discovers the Borg have made a desperate effort to avoid defeat by sending a ship back in time to assimilate Earth’s population. The Enterprise follows, determined to stop the Borg from rewriting history. They end up in 2063, on the day before humanity is set to make first contact with the Vulcans. In the aftermath of a Borg attack, Enterprise crew members must help engineer Zefram Cochrane (James Cromwell) launch his ship and keep his rendezvous with history.

The Earthbound story is much more lighthearted, with Cromwell playing Cochrane as an irascible rummy who’s horrified to learn that he’ll become a revered historical figure. There’s little room for levity on the Enterprise, where the android Lt. Commander Data (Brent Spiner) is held captive by the disturbing Borg Queen (Alice Krige), and multiple crew members meet grisly fates as the Borg assimilate them. Frakes, making his feature directorial debut after helming numerous episodes of various Star Trek TV series, keeps the tones balanced, and the stakes feel equally high in each storyline.

High-stakes adventure is what’s come to define modern Star Trek, but it still feels fresh in First Contact, both for the future of humanity and for the lives of the individual characters. First Contact is a fantastic acting showcase for Stewart, who spends much of the movie paired with Alfre Woodard as Cochrane’s associate Lily Sloane. Picard’s fiery tirade against the Borg, declaring, “The line must be drawn here!” is one of Star Trek’s most iconic moments, and it’s Lily who’s on the receiving end. Befitting the high-minded Picard, she only breaks through his defensiveness about the Borg via a literary reference, comparing him to Captain Ahab.

First Contact excels at that mix of refined intellectualism and thrilling spectacle, moving from rousing speeches about the nobility of exploration to suspenseful confrontations between Starfleet and the Borg. A scene of Picard, Lt. Commander Worf (Michael Dorn), and obvious cannon fodder Lt. Hawk (Neal McDonough) taking a spacewalk along the hull of the Enterprise to sabotage a Borg communications device is as tense as any action sequence in the bigger-budget Abrams movies. It also benefits from what comes before, building on the dynamic between Picard and Worf that was developed over seven seasons of the Next Generation TV series.

First Contact is full of references and cameos for dedicated Star Trek fans, but it’s never a self-congratulatory tribute to past continuity. Like all the best Star Trek, it’s a bold journey into the future, both of the galaxy and the franchise.

More like this
Culture
November 24, 2022
One of A24’s least-seen movies is also one of its most intriguing
By Dais Johnston
Culture
Dec. 2, 2022
Patrick Stewart steals the show in this intense punk rock thriller
By Alex Welch
Culture
November 20, 2022
How The Mist’s infamous ending created the darkest Stephen King adaptation
By Mónica Marie Zorrilla
Related Tags
Share: