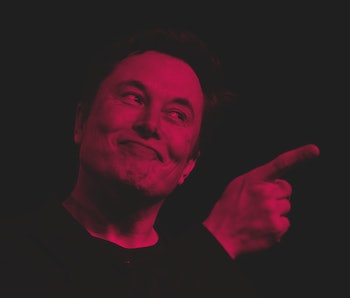 Ancient Greeks and Romans named the planets after their gods because of characteristics the two had in common.

But what if we were to name to celestial objects after the icons of today? Here are a few space objects in the news recently, and one evergreen comparison we don't think will change any time soon...

Input: What is wrong with Elon Musk?

HR 6819 is the Michelle Williams of black holes — Scientists recently discovered the nearest black hole to Earth ever detected, located only 1,000 lightyears away from us. As exciting as it is to have one of those cosmic beasts as our galactic neighbor, the black hole in question turned out to be quite, well, boring. It's not flashy -- which is probably a good thing, given its galactic proximity. HR 6819 is essentially the Michelle Williams, from Destiny’s Child, of black holes.

"As a black hole, it is the most boring thing you can imagine," Dietrich Baade, an astronomer at ESO, and co-author of the new study, tells Inverse.

The black hole in question is surrounded by two orbiting bright stars, aka the true stars of the iconic girl group Beyonce and Kelly. And while the stars are bright enough to be observed from Earth, the black hole is dark, silent and invisible. Additionally, the black hole shows no activity whatsoever, it’s not feeding off of surrounding material nor does it have an accretion disk that lights up as an aura around it like other black holes do. But just like Michelle was essential to the '90s R’n’B trio, the black hole’s gravitational pull keeps the stars shining in orbit while it dims in the background.

At the end of the day, even though we could do without those 10 seconds of Michelle’s verse in any Destiny’s Child song, her faint harmonization in the background did keep the group strong, and segued listeners perfectly to the chorus.

The gaseous giant exoplanet has scorching temperatures, iron rain and yellow skies. In a recent analysis of the planet’s atmosphere, scientists found no evidence for Rayleigh scattering, the atmospheric phenomenon that turns the sky into its familiar blue color. Instead, they believe that the exoplanet has a yellowish sky. Just like Joe Exotic, the exoplanet is possibly the only one of its kind. And the more we probe into the characteristics of this pair, the more confused we are, and unable to understand the origin of their behavior.

"I've shown the WASP-79b spectrum to a number of colleagues, and their consensus is 'that's weird,'" Kristin Showalter Sotzen, a researcher at the Johns Hopkins University Applied Physics Laboratory in Laurel, Maryland, and lead author of the study, said in a statement. "This is a strong indication of an unknown atmospheric process that we're just not accounting for in our physical models."

The Moon is the Rihanna of celestial objects — Although we’re quite familiar with Earth’s only natural satellite, we still have a lot of questions about the Moon; namely what it is made of and how did it form? A new study contradicts a well-established theory about the composition of the Moon and dismisses a long-standing hypothesis about how the Moon formed in the Solar System. The study found traces of carbon ions across the lunar surface, despite a previously held theory that the Moon is completely void of volatile, readily vaporizing elements such as carbon. The findings raise more questions than answers about the Moon, and yet we’re grateful our lunar rock exists either way.

The same way fans have so many questions about Rihanna, namely when the artist will drop new music? Will there ever be a new Rihanna album? Has she retired from making music? But ultimately, do we really care as long as we have her shining presence hovering over us? Not really. The Moon continues to grace our skies every night with its light, the same way Rihanna continues to release those swoony makeup tutorials that we keep watching on loop.

So while we’d love some new music, and answers about how the Moon formed, we’re just happy they’re both there.

On February 21, 2019, Japan’s spacecraft Haybusa2 made a rocky landing on Ryugu to gather samples from the asteroid. Their encounter, while brief, shook up both of their worlds and a video of it was recently released that shows their rendezvous in great detail.

The two objects are extremely different and do not belong together, the same way Kanye West and Taylor Swift refuse to mix. Haybusa2 has been orbiting Ryugu for over a year before finally landing on it, the same way the rapper and country singer have been circling each other’s lives before their relationship peaked with a rocky confrontation, the details of which were later leaked almost a year later.

Samples from the spacecraft’s encounter with the asteroid will give scientists unprecedented detail into these rocky bodies, the same way West and Swift’s brief encounter opened our eyes to how terrible both of these artists are.

Mars is the Elon Musk of planets — For as long as humans have wondered about the planets, they've ascribed personalities to them. Think of Mars, the Roman God of War, and what an appropriate title it is for the red planet. But those ancient comparisons would do well to be replaced with more modern counterparts. As such Mars should be renamed to the planet’s wannabe overlord Elon Musk.

Musk loves to talk about colonizing Mars as much as the Red Planet loves cooking up massive dust storms (the answer to both is, a lot!). It’s no wonder the SpaceX CEO and the dusty planet are a match made in cosmic douche heaven since they both love attention, making grand gestures and pretending like nothing else exists in space around them.

Keeping up with the Kosmos is an occasional series from Inverse.