How 'Gotham' redefined 2 iconic Batman villains for the better 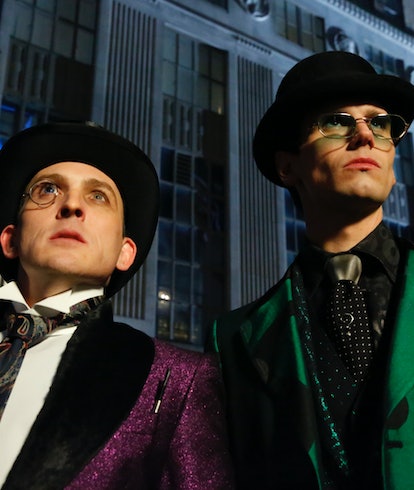 “I can’t be bought, but I can be stolen with one glance. I'm worthless to one, but priceless to two. What am I? Love.”

The Batman prequel show about a city police department, a teenage Bruce Wayne, and a bunch of not-yet-super villains had been hinting at one gay relationship for years. Then, in its third season, what was previously just a relationship imagined by fans (or a ship, for short) became actual series canon. Well, sort of.

Gotham was notable for many reasons, from its portrayal of street-level crime in the city the Wayne family helped build to its ghoulish take on the Joker. But perhaps the most interesting plotline the DC series ever pulled off focuses on the Penguin and the Riddler.

Gotham is streaming in its entirety on Netflix until September 29. Here’s one reason (among many) that it’s worth watching the show while you still can.

In the first season of Gotham, fans meet a low-level criminal named Oswald Cobblepot (Robin Lord Taylor), who would become the Penguin; and forensic science technician Ed Nygma (Cory Michael Smith), who would become the Riddler. Their first encounter was charged but short-lived, and by Season 2 they became a popular ship known to fans as “Nygmobblepot.”

Then, in Season 3, everything changed.

In Season 3, Episode 5 — “Follow the White Rabbit” — Oswald and Ed’s relationship went from subtext to text after Oswald confesses his love for Ed. It turns out Oswald is just practicing, and Ed isn’t even in the room to hear it. But by having him declare his love out loud, Gotham unambiguously confirmed that his feelings were romantic. Yes, it was one-sided. Yes, in the very next scene Ed met a woman and fell for her. But that’s the nature of TV.

Having Oswald declare his love, only for Ed to be with someone else, put Penguin/Riddler on the exact same level as popular straight will-they-won’t-theys from the time like Jonah and Amy on Superstore or Ross and Rachel in Friends. (To be fair, this isn’t the first time we’ve seen a gay relationship in a DC series, but Penguin is probably the most well-known character to break that barrier.)

As a gay man, I was immediately invested. Penguin was a monster, but his vulnerability around Ed was just emotionally resonant enough to suck you in.

The Penguin and the Riddler

In the end, the relationship wasn’t all it could’ve been. They didn’t end up together, they didn’t kiss and there was nothing explicit confirming that Ed reciprocated Oswald’s feelings. But in the nearly three years between “Follow the White Rabbit” and the series finale, Gotham took me on a journey that no other gay ship has lived up to.

I admit it would’ve been better queer representation if Ed had been confirmed as interested in men. But I did really enjoy how much Ed’s sexuality didn’t matter. Over and over again, Ed (and by extension the writers) had the opportunity to say he could never be interested in any man romantically. Instead, he always reiterated that he could never love Oswald because of the things he’d done. Gotham is a story about a gay man with a crush on his best friend that zips right past Oh no, what if he’s straight? and into I murdered someone and now we’re enemies locked in an eternal battle for vengeance.

As the relationship went on, it only became more entertaining and bizarre. The magic behind the Penguin/Riddler ship was the same thing that made Gotham great in general: a combination of intensity and silliness. They were caught up in a violent psychosexual thriller, but at times it felt more like they were in a Road Runner cartoon or an Odd Couple-style sitcom about two petty people constantly annoyed at each other’s quirks.

The larger-than-life world of cartoon savagery on Gotham made it the perfect show to create a refreshing gay ship in 2016. Earlier that year, just before the Penguin/Riddler will-they-won’t-they kicked into gear, three very different shows — Halt and Catch Fire, Quantico, and The Fosters — all presented storylines where a queer man becomes close to a man of more ambiguous orientation, only for it to end in tragedy. Seeing this play out over and over again across different genres was exhausting and left me with the sense that any ship involving two men that’s not unambiguously happy from the jump will only end in sorrow. Then came Gotham.

In Gotham’s mid-Season 3 finale “The Gentle Art of Making Enemies,” Ed murders Oswald. The scene was incredible, full of epic romance and sexual tension. Oswald declared that Riddler and Penguin can’t exist without each other. Ed looked pained. He didn’t want this to happen either, but he had no choice. The epic romance wasn’t the main thing that made this scene different from other similar scenes. The big difference was simple: Oswald survived.

When Gotham came back from winter hiatus, Oswald returned with a ridiculous explanation about Poison Ivy pulling him out of the river and nursing him back to health. He happily declared that he was going to murder Ed. Later in the show, Oswald got his revenge by completely freezing Ed him in ice but, don’t worry, Ed bounced back.

That’s Gotham for you. It’s one of the few superhero shows that really captured the feeling of following comics, where characters are sloppily tossed out or brought back as needed.

But to me, these goofy quasi-murders were more than that. Oswald and Ed were so satisfying to watch because they could experience tragedy and it still didn’t matter. It wasn’t a show that treated its gay characters with kid gloves, giving them nothing but wholesome and pure relationships. But it also didn’t relegate queer male relationships to darkness and tragedy. Instead, it suggested that the bond between two men can be so powerful that even if they both murder each other, it will in no way stop them from flirting.

Gotham is streaming on Netflix until September 29.