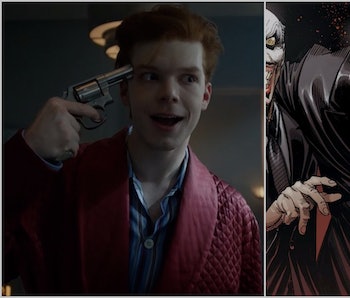 Cameron Monaghan, the actor who plays Jerome/Joker on Fox’s Gotham, has been waging a one-man guerrilla publicity campaign for his character’s probable revival as the Joker. Now, another new hastily posted-then-deleted tweet shows the actor wearing a classically-inspired Joker costume, to go along with his new face.

Jerome’s character was introduced as a potential proto-Joker, with the Show’s creators making no commitments to whether or not this lowly Gotham stand-up comic would eventually become the city’s most insane criminal. However, after getting locked-up in Arkham Asylum and becoming a leader of a gang of criminals only to get killed, it seemed like the story of Jerome was over.

That is until the show revealed that his legacy created a kind of cult among Gotham City’s underground, spawning a wave of copycat criminals. Then characters started coming back from the dead, and suddenly Jerome appears likely to be Gotham’s biggest threat, again.

Despite the black background, the picture makes it clear that Jerome is wearing the classic, purple and white ensemble of the Joker. And while it’s not clear whether or not Jerome is wearing white face makeup, it wouldn’t be a stretch to say his face is definitely looking paler than when he was alive. Though that could just be the fact that he was a corpse.

Although the tweet in which this image was embedded is no longer available, it fits with the several other photos Monaghan have been hastily posting, then deleting, on his social media. If this isn’t an official confirmation, then it’s a pretty good, Joker-sized, prank on the part of the actor.