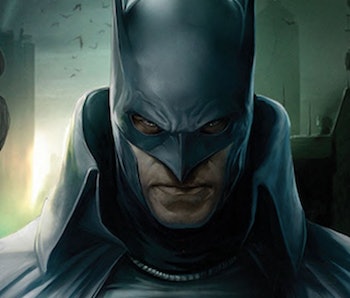 You’ve probably never given much thought to what Batman would be like in the Victorian era, but DC comic book writers Brian Augustyn and Mike Mignola certainly did. In 1989, the comic Batman: Gotham by Gaslight was published as the first installment of DC’s Elseworlds series, non-canonical stories about DC characters set in different eras and realities.

The Elseworlds line was canceled in 2003, but in 2018 DC released an animated adaptation of Gotham by Gaslight, loosely based on the comic book of the same name.

It’s 1889, and Gotham City is as crime-ridden and corrupt as its modern adaptations, but the city’s biggest problem is a serial killer targeting sex workers. It’s up to Batman to stop Jack the Ripper.

The joy of a movie like this is in seeing just what classic Batman characters are like in another universe. Some are just as you’d expect: Harvey Dent is the district attorney, and James Gordon is still the police commissioner. There are also appearances from the three primary Robins (Dick, Jason, and Tim) as Oliver Twist-like urchins stealing to survive on Gotham’s cruel streets. Leslie Thompkins is a nun who runs an orphanage and provides charity to the poor, and there’s a brief cameo from Pamela Isley (Poison Ivy), who becomes the Ripper’s first onscreen victim.

Bruce Wayne (voiced by Bruce Greenwood) is always Bruce Wayne ― you can stick a millionaire playboy philanthropist in just about any era, and it’ll work. Bruce isn’t fundamentally different from any other Batman iteration, except that he’s depicted as more progressive than other men of his era, which shows in his attitudes toward women and the poor. His Victorian Batsuit, however, looks high-tech while still being era-appropriate.

Meanwhile, Selina Kyle is shown as an actress who grew up in a circus, which presumably helped her develop her theatrical abilities and impressive whip-lashing skills. Selina’s close to the impoverished areas where women are being murdered and is anxious to turn the police’s attention to the killings. But she has little sway with the law, and when she can’t put enough pressure on the police, she decides to take matters into her own hands and track down the killer herself, with Batman eventually helping her.

It’s a solid story for the character, and through the movie, Selina develops a sound rapport with both Bruce Wayne and Batman. With their similar ideals and desire for justice to be served, the two make a compelling team.

Jack the Ripper is a natural foil for Batman; he’s already been put against Sherlock Homes, so why not DC’s master detective as well? Unlike when Batman battled Dracula, he’s a regular character rather than a supernatural being, which feels more in Batman’s wheelhouse than a fight with a mythical monster.

Naturally, a large part of the mystery is uncovering Jack the Ripper’s identity, and there’s great fun in trying to guess who the bad guy is rather than just throwing in a classic Batman villain from the beginning. Instead of rehashing one of Batman’s old adventures, only with the Joker running around in a pair of steampunk goggles, the movie gives the audience the scope to make guesses, hinting at any number of suspects before dropping a surprising reveal.

It all makes for a compelling alternate universe that feels credible rather than gimmicky, and at a mere 78 minutes, Gotham by Gaslight hardly overstays its welcome. With The Batman 2 still far off on the horizon, it’s an easy and clever way to embrace the investigative side of the famous detective.

Batman: Gotham by Gaslight is streaming on HBO Max.

More like this
Culture
Jan. 25, 2023
Hansel & Gretel: Witch Hunters is a flashback to the strange excesses of 2013
By Mark Hill
Culture
Jan. 31, 2023
Final Destination 2 Perfected the Art of the Gross-Out Kill
By Jon O'Brien
Entertainment
Feb. 2, 2023
7 DC Movies and TV Shows We Won't See Under James Gunn
By Eric Francisco
LEARN SOMETHING NEW EVERY DAY.
Related Tags
Share: