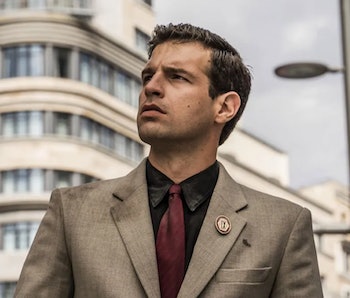 You might say spies are having a moment in pop culture. But to be honest, when have spies not been cool?

Andor is currently bringing new life to Star Wars on Disney+ with the origin story of the beloved Rebel spy, while the search for a new James Bond has been making headlines on a weekly basis. Marvel’s Nick Fury is gearing up to go on a shadowy globe-trotting adventure of his own in Secret Invasion, and there’s a decent chance someone you know dressed up as Austin Powers this Halloween. But while they’re all unique in their own ways, there’s one thing that unites these beloved spies: they’re likable from the get-go.

Is the entertainment industry due for an unlikable spy? If so, HBO Max has us covered. Enter: ¡García!

Based on the graphic novel of the same name and directed by Eugenio Mira, ¡García! follows a superhuman spy who is cryogenically preserved — and later thawed — by an amateur reporter.

Sure, García (Francisco Ortiz) is a polished man with exquisite taste and impeccable timing, but he also happens to have been a certifiable villain in his previous life. He’s never been one of the good guys, though he’s only just begun to come to terms with that. Despite his dashing looks, undeniable charm, and superhuman hand-to-hand combat skills, García is worse than your typical anti-hero. He’s an actual fascist hailing from the Francisco Franco regime, which ruled Spain from 1939 to 1975.

We first meet Garcia during that era in a black-and-white vignette. During a mission that finds him fighting a Soviet agent, our spy winds up shot dead. Or so you might think. 50 years later, he’s brought back to life and thrust into a semi-fictitious version of modern Spain where politicians regularly get kidnapped and a vast network of spies are working to bring back Francoism in Spain.

The other half of García’s premise comes from Antonia (Veki Velilla), a 23-year-old journalist struggling to impress her boss and secure a full-time job. Everything changes when she gets hit by a car and accidentally winds up grabbing the driver's personal items. Among them, Antonia finds a file on Garcia and the plot to turn him into a super-spy, cryogenically freeze him, and hide his body under a church. Of course, Antonia decides to defrost the fascist superhero.

From there, ¡García! plays out like a clever subversion of Captain America: The Winter Soldier. Garcia is perplexed by modern life and struggles with everything from pixie cuts to new types of milk. He also struggles to live in a non-fascist Spain. Thankfully (or, perhaps, unfortunately) that’s where the conspiracy comes in.

¡García! is bolstered by a tightly paced, six-episode inaugural season. The show never drags and it sticks to the source material’s clever usage of simultaneous timelines. The story spans several decades of political unrest and frustration, with everything from the costumes to the dialogue to various spy gadgetry grounding each piece of the timeline.

Swanky ‘60s-era instrumentals, composed by the show’s director himself, befit a sleek spy show of that decade rather than the 2020s and add to the genre-bending and time-warping ambiance. The music only reinforces Garcia’s status as a man out of time.

Perhaps most crucially, ¡García! also exposes the ripple effect of almost 40 years of fascist rule. The series shows how some of Spain’s elderly still glorify Franco’s “law and order” and “democratic principles,” while many young people have become increasingly swayed by right-wing extremism. It may come as a surprise that a sci-fi show about a super-spy can offer such a realistic portrayal of the divisiveness that plagues Spain today.

Ultimately, ¡García! is a story of redemption, but it’s not an easy one. The main character embarks on a slow arc toward progressivism as he comes to understand the negative impact of Francisco Franco’s fascist rule. The HBO Max series mines plenty of humor out of its Austin Powers-esque time-travel premise, but there’s also a serious story here about the stain left behind by villainy and corruption.

Given enough time, ¡García! may just reach the heights of some of pop culture’s greatest spies. But in the process, the series can also expose the bitter reality of this glossy profession. A lot of spies are bad people, and it’s about time our entertainment reckoned with that fact.