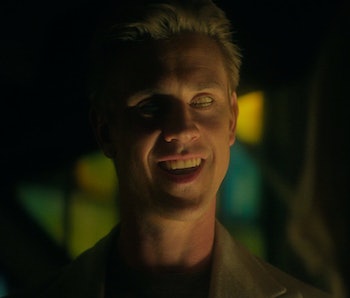 The Corinthian, played by Boyd Holbrook in Netflix’s Sandman adaptation, wasn’t meant to be a fan-favorite character. After all, he’s a brutal and bloodthirsty homicidal maniac who revels in the tired “bury your gays” trope by seducing men only to murder them before stabbing out and consuming their eyes. (His own eyeballs are a pair of tiny mouths hidden behind suave sunglasses.

However, the Corinthian’s wiles and charm, coupled with objective attractiveness, accented twang, and Holbrook’s layered take on the serial killer, made him a hit. If you just finished watching The Sandman Season 1 on Netflix, you might be wondering what’s next for Boyd Holbrook’s character. Here’s what the comics reveal — and how the show could deviate from its source material. Spoilers ahead!

Who is the Corinthian in Sandman?

In the Sandman comics, Morpheus’ original intention for the Nightmare known as Corinthian was “to be the darkness and the fear of darkness in every human heart. A black mirror made to reflect everything about itself that humanity will not confront.”

Perhaps it was Morpheus’ own arrogance or cynicism about humans that led the Corinthian’s creation to go awry, but this Nightmare was an abject failure from the start. As soon as he could (even before the events of Volume 1 of Sandman), the Corinthian fled The Dreaming and went rogue in The Waking World where he committed a series of gruesome murders. Because Corinthian does not have normal eyes, he primarily enjoys stabbing the eyes of his victims and then consuming them. In the comics, his victims of choice are young boys, but in the show, they are adult men.

Morpheus attempts to stop Corinthian twice, but both times he is thwarted — it’s during his second attempt that he is captured by Roderick Burgess (Charles Dance), setting up the events of The Sandman. Free to do what he desired in The Waking World, Corinthian goes on a centuries-long murdering spree and influences others into indulging their homicidal impulses, essentially inspiring an entire generation of serial killers who refer to themselves as “The Collectors.” Corinthian is a narcissist who prides himself on his “invincibility” and for his celebrity among humanity’s murderers.

In the season finale of The Sandman and at the end of The Doll’s House arc, Morpheus intervenes just as Corinthian is giving his guest-of-honor speech at the “Cereal” convention. Dream manages to stop his Nightmare, turning Corinthian into a shrunken-head skull and giving it to Lucienne (Vivienne Acheampong), who promises to keep it safe. Before moving on, Morpheus notes that he has other intentions for Corinthian — eventually.

Does the Corinthian come back in The Sandman?

The Corinthian isn’t recreated in the Sandman comics until the ninth volume, The Kindly Ones, when Morpheus needs his help to rescue and protect Daniel (the child of Lyta and Hector). Without getting deep into spoiler-territory, Daniel’s unique hybrid-human-and-dream status makes him one of the most important characters in the Sandman comics. He is kidnapped by Puck (yup, that mischief-maker from Shakespeare’s A Midsummer Night’s Dream) and Loki (the Norse trickster god), both of whom are introduced in Volumes 3 and 4 of the comics. If Sandman were to get the Season 2 greenlight from Netflix, we’ll soon be meeting two of Morpheus’ biggest adversaries.

As Corinthian 2.0, the serial killer and Nightmare is transformed into a good guy with his penchant for violence still ingrained in his DNA. He does come to Morpheus’ aid and succeeds in being Daniel’s bodyguard. In the process, however, he defeats Loki and Puck, and eats their eyes— classic Corinthian behavior!

Will The Corinthian be in Sandman Season 2?

While The Corinthian is regenerated by Morpheus toward the end of the ten-volume Sandman comic book series (not counting canon additions and spinoffs), he may make an appearance even sooner in the Netflix series. Holbrook’s spine-chilling (but also seductive?) take on the serial killer has captivated audiences and earned the actor accolades. As a fan-favorite villain, his chances of popping up in Season 2 are high, though far from confirmed. (After all, his shrunken-head skull is in the safekeeping of Lucienne, Morpheus’ most trusted ally.)

It is evident in the finale that the show is setting up the rivalry and drama that is slated to unfold between Morpheus and the Endless siblings in the comics. Desire, Despair, and Delirium have an ongoing beef with their older brother, the King of Dreams. Desire (Mason Alexander Park), known to be a trickster and temptress, could very well find a way to fool Lucienne and use Corinthian for their bidding.

We’ll have to wait and see if Corinthian returns in The Sandman Season 2 — assuming Netflix renews the series at all, of course.

The Sandman is streaming now on Netflix.

More like this
Entertainment
Sep. 21, 2022
You need to watch DC’s most underrated movie of all time on Netflix ASAP
By Eric Francisco
Culture
Sep. 20, 2022
5 amazing sci-fi shows and movies leaving Netflix in September 2022
By Robin Bea
Science
Sep. 16, 2022
The science behind The Rings of Power's mesmerizing title credits
By Tara Yarlagadda
Related Tags
Share: