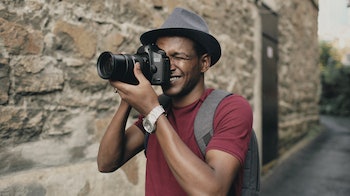 A good beginner DSLR camera not only takes great photos, but is also a tool to help you learn the fundamentals of photography. Details that might matter less to more experienced photographers, like an easy-to-read user interface, will be more important for those just learning to use a DSLR than, say, the number of megapixels. The best DSLR cameras for beginners will have solid base technical specs that you can grow into, but are also comfortable in your hands, and will make you feel excited to start shooting.

Entry-level DSLRs will have a cropped, or APS-C, sensor. While full-frame sensors have the same dimensions as 35mm film, cropped sensors are slightly smaller, lighter, and significantly cheaper. However, buying an APS-C DSLR means that you’ll have to do some math when buying lenses, as the cropped sensor will create a magnifying effect on your image. All of our picks have cropped sensors, as the price of a full-frame camera can be prohibitively expensive for most beginners.

Resolution and screen type are also important aspects to pay attention to when choosing your first DSLR camera. The higher the resolution (represented by the number of megapixels), the more you can zoom and crop photos later without losing image quality and or getting excessive digital noise. While your camera’s screen won’t affect the quality of your images, an articulating or tilting screen makes it much easier to take photos at all angles — plus, you can swing it out so it faces you when you’re vlogging or taking selfies.

If you’re purchasing a beginner DSLR camera, you’re probably looking to produce high-quality stills. But if you’re also looking to record your memories and adventures on video, the standard max video resolution on base model DSLRs is Full HD (1,920x1,080), but some offer 4K video as well.

With all of this in mind, here are some of the best DSLR cameras for beginners — and they're all available on Amazon.

Nikon’s entry-level DSLR is a well-rounded camera that can stand up to most tasks beginner photographers will face at a pretty reasonable price. This package comes with the body and two lenses, an 18-55mm kit lens, and a versatile 70-300mm zoom lens, all for under $600.

What’s great about the D3500 is that you can start taking clear and vibrant photos right away by using the camera’s intelligent auto-mode. The D3500’s auto-mode reads your environment’s light levels and adjusts the camera’s light sensitivity (ISO), shutter speed, and aperture (how wide the shutter opens) for you, creating consistently well-lit images with zero hassle. If you’re shooting video, the D3500 can shoot in Full HD 1920x1080 resolution at up to 60 frames per second, which is more than sufficient for most personal videography projects.

Once you’re ready to jump into manual mode, the user-friendly display helps you understand how adjusting each of the settings will affect the overall exposure of your photo. The D3300 doesn’t have a ton of extra bells and whistles like an articulating display, but it has great bones at a price that can’t be beaten.

2. The best for video

If you’re looking to primarily shoot video but also want to capture incredible stills, the Canon EOS Rebel SL3 is your best bet. It’s one of the only entry-level DSLRs that offers 4K video resolution, and the camera’s lightweight body makes it great for traveling. The SL3 also has a fully articulating touch screen that swings out, so you can see what the camera sees while taking selfies or vlogging.

With the SL3’s nine-point autofocus, the camera operates almost like a point-and-shoot camera while in auto-mode. The autofocus also has eye detection, which will make sure your subject is in focus, rather than an object behind them. It does a great job of snapping to an intended subject quickly, but if you’re looking to switch to single-point auto-focus, changing the settings is a little less intuitive than on the D3500.

The SL3 is both Bluetooth and Wi-Fi compatible, so you can connect the camera to a smartphone to either use as a remote shutter release or instantly view and download images. There’s also a webcam utility that allows you to use the SL3 (and two dozen other Canon cameras) as a webcam for video conferencing meetings. The body comes in both black and white.

3. The best for outdoor photography

The Pentax K-70 was made for outdoor adventuring, but even if you and your camera never leave the city, it offers stellar performance for photography enthusiasts and looks incredibly handsome too.

The camera is weather-sealed, so it’s great for photographing outdoor adventures in light rain, but you may want to further protect it or seek cover during a more aggressive downpour. For those who often frequent colder climates, the K-70 remains responsive and performs even in temperatures as low as -10 degrees Celsius. The in-camera shake reduction also ensures that memories of your adventures are captured clearly while shooting handheld.

Unlike many entry-level DSLRs which do best in bright conditions, the Pentax K-70 shines at night and in other low light situations. Its ISO tops out at 102400, so you’re able to shoot in well after the sun goes down, and its PRIME MII imagine engine reduces the digital noise created when shooting at super-high sensitivities.

If you’re into astrophotography, the night-vision display is red-tinted to not disturb your eyes once they’ve adjusted to the dark night sky. And if you’re looking to capture an epic time-lapse of the stars, the K-70’s interval movie mode can take your high-resolution stills and turn them into a 4K video file. The body comes in both black and silver.