25 years ago, the worst Batman movie ruined the franchise — and inspired a modern trend 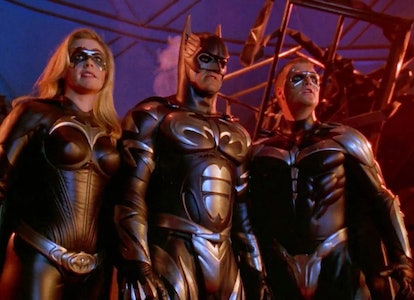 It’s hard to remember, but there used to be a time where superhero movies didn’t have to take themselves seriously. 1978’s Superman and 1966’s Batman weren’t weighed down with cinematic universes and examinations of grief and trauma, but were love letters to comic books full of goofy stories of heroes saving the day from over-the-top villains.

This mood reached its apex in 1989 with Tim Burton’s Batman, which used Burton’s iconic vision to create a twisted world with enough suspension of disbelief for all sorts of comic hijinks. Thanks to the movie’s success, Burton oversaw a whole series culminating in one movie that topped all the others in maximalism, witty dialogue, and total derision. 25 years later, it’s clear Batman & Robin was ahead of its time.

It also disconnected from the other films by inducting yet another actor into the Batman club. After Val Kilmer and Michael Keaton both had their turns in the cowl, Schumacher brought in George Clooney and all the raw charisma he brings to every role.

Raw charisma is just what’s required to sell the dialogue in this movie. Where else would you see Batman whip out a credit card and say “Never leave the cave without it” in an absolute deadpan? Seemingly every other line is a witticism or pun. It might have been a shock then, but after so many years with the Marvel Cinematic Universe’s specific sense of humor, it’s almost refreshing to have a superhero movie be funny. Not snarky, not sassy, just straight-up goofy.

And oh, the plot. Batman & Robin should perhaps be called Mr. Freeze & Poison Ivy, as the two carry every scene they’re in. Arnold Schwarzenegger is far more Hercules in New York than the Terminator as Mr. Freeze, and Uma Thurman is at her slinkiest as Poison Ivy. Both of them make a meal out of the scenery, which is the only way you could successfully pull the roles off.

What makes this movie perfect for 2022? Just look at the headlines. Todd Phillips’ massive success, Joker, is getting a musical sequel possibly starring Lady Gaga as Harley Quinn. Joker was very much a “gritty reboot” in the vein of the Christopher Nolan Batman films that eventually replaced the Burton series, but there was an undercurrent of dark comedy.

In Batman & Robin, we see just what happens when that undercurrent is allowed to take center stage. In 1997 it may have scared Hollywood away from brash and unapologetic superhero movies, but Joker 2 is proof that the world is finally ready for what it couldn’t handle last century.

Note: A previous version of this article misstated the release dates of Batman the movie and Tim Burton’s Batman. We regret the error.