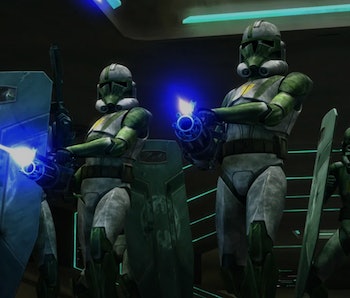 When Revenge of the Sith was released in 2005, it seemed like Geroge Lucas finally answered a question that Star Wars fans had asked since the ‘80s. How did the Emperor suddenly take out all the Jedi? The existence of Order 66, a secret command issued to the Clone Troopers, was the answer. And yet by the time of the classic trilogy, the apparently loyal clones had been replaced by conscripted troops. Why?

The Bad Batch Season 2 trailer implies this strange transition period will continue to be explored in a way that hopefully cleans up one of the messier aspects of Star Wars canon.

According to the trailer, the thrust of Season 2 seems to push both the Batchers and the galaxy closer to the status quo of the classic trilogy. Mostly, this means that Captain Rex, a proto-Rebellion member, is sending the Bad Batch on more missions that take the fight to the Empire. The Bad Batch isn’t joining the Rebel Alliance, because at this point in the timeline there’s no such thing. But overall, Season 2 seems focused on the Bad Batch versus the Empire. Palpatine is in the trailer, and former Batcher Crosshairs is all about taking out old colleagues he’s dubbed “traitors, like the Jedi.”

It’s here where Bad Batch Season 2 is doubling-down on one of its big long-term goals: To explain how and when the Clones were phased out and replaced by Stormtroopers.

By Rogue One and A New Hope, almost all the Clone Troopers have been replaced by human Stormtroopers. In Bad Batch season 1, Tarkin suggests this decision is more economical than ideological, saying the Clone army provides “a service conscripted soldiers could provide at half the cost.”

Bad Batch Season 1 also demonstrated that clones who retained their inhibitor chip began pushing back against new Imperial orders. In the Season 2 trailer, Rex says, “rumors are more and more Clones have been questioning the Order.” The brutality of Order 66 apparently clashed with the Clones’ conditioning. In short, what seemed black-and-white in Attack of the Clones and Revenge of the Sith is complicated and still unfolding.

In Obi-Wan Kenobi, which takes place a decade after The Bad Batch, we see a clone veteran begging for change, which would indicate that most clones had been kicked out of the Empire’s service at that point. However, in the Season 1 finale of Andor, we see soldiers in what appear to be Clone Trooper uniforms on Ferrix. Andor has shown both Stormtroopers and Clone Troopers, which suggests there was still an intermingling of the two well after the events of Obi-Wan and The Bad Batch.

So, which is it? Will The Bad Batch Season 2 show us the moment when the Empire rids itself of its clones? Or will it reveal that another round of cloning happened separate from the Kamino program?

The Season 1 finale of The Bad Batch, “Kamino Lost,” seemingly re-canonized a location called Mount Tantiss on the planet Wayland. In Legends canon, the Empire ran secret cloning projects here, which seems to be the case in the current canon too. It’s possible that The Bad Batch Season 2 could introduce a new group of Clone Troopers, which would account for those we see in Andor Season 1. The other explanation is that the saga of all the clones in Star Wars is far from over.