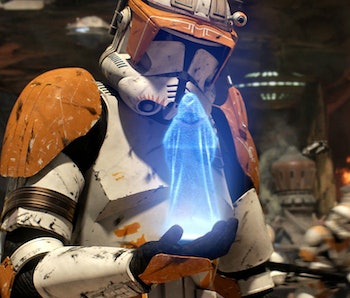 Do clone troopers dream of Orders other than 66?

Star Wars: The Bad Batch just indicated that Emperor Palpatine made a grave error when he told Count Dooku to grow him a secret clone army. Since murdering the Jedi without question in Revenge of the Sith, Clone Troopers with working inhibitor chips have suddenly gone rogue. And we’re not talking about a few random Bad Batchers or allies of Ahsoka Tano; even run-of-the-mill clone troopers are on the fritz.

With The Bad Batch, the Star Wars canon is explaining the rise of stormtroopers within the Empire. And this past episode saw a change that shakes some prequel assumptions in a big way. Spoilers ahead for The Bad Batch Episode 12 “Rescue on Ryloth.”

Why the Empire really got rid of clones

From the start, The Bad Batch has been laser-focused on explaining why the clone troopers would eventually be replaced by non-clone human recruits in Palpatine’s Galactic Empire. In the first episode of The Bad Batch, Tarkin told the Kaminoans that making clones was too expensive. But now, in “Rescue on Ryloth,” a different, more startling explanation has been introduced. The clones are now starting to disobey the orders of the Empire because they have decided — of their own free will — that those orders are unethical.

In The Clone Wars, Rebels, and now The Bad Batch, Star Wars animated series have made it fairly clear that clones who disobeyed Order 66 were not representative of the larger whole. In addition to the Bad Batch, we really only know about a handful of other renegade clones: Cut, Rex, Wolffe, and Gregor. These guys, plus the Batchers, are all supposed to be outliers. In the first episode of The Bad Batch, Hunter and the others were slightly horrified that everyone around them was suddenly gung-ho for the Empire.

It’s important to note the Jedi were destroyed solely because almost all the clones followed Order 66. If you’ve only seen the live-action Star Wars projects – including The Mandalorian — you would have no idea that any clones were even harboring a shred of human decency. In fact, the visual evidence presented by Revenge of Sith suggests just the opposite: Yoda beheads clones and later stabs one through the chest. In the film, after Order 66 is issued, it seems clear clones are mindless killers who can’t be trusted.

The animated Star Wars cartoons have been walking back this notion since 2008, but the latest twist in The Bad Batch is the coup de grâce of murder-clone retcon.

Most clones are... good?

In a stunning reversal of clone canon, Bad Batch Episode 12 changes all the previous assumptions we’ve had about these characters. In this episode, a clone captain named Howser refuses to target civilians on Ryloth in defiance of direct orders from his Imperial superiors. And it’s not just Howser — about half of the regular clone battalion also lays down arms and refuses to follow what they see as unethical Imperial orders. Now, this larger story has been brewing in the various animated Star War series for a while. The clone army was only created by Palpatine so he could orchestrate the Clone Wars then carry out Order 66. With the Empire fully established as the galaxy’s governing force, clones have apparently outlived their usefulness. And, suddenly, many of them are growing a backbone.

This is all well and good in terms of cleaning up Star Wars continuity to explain stormtroopers. But, presumably, Howser and all these renegade clones participated in Order 66. Earlier in The Bad Batch, the character of Crosshair had implied that the inhibitor chip not only made clones carry out Order 66 but also seemed to make them more loyal to the Empire.

Remember, in Bad Batch episode 1, the Batchers were weirded out that all their brethren were on the Empire’s side. Crosshair keeps saying, “Good soldiers follow orders” which leads him to commit unnecessary murders even after Order 66 has been carried out. Before Episode 12, you could chalk this up to his chip still being active.

But now, that binary is past. Post-Bad Batch Episode 12, it appears the inhinbitor chip only made clones carry out Order 66 and did not condition them in any other way.

That means the clones have a diverse array of personalities, chipped or not, which explains why some side with Howser and others don’t. Instead of mindless killing machines, clones are laying out their own codes of conduct.

Is this Palpatine’s biggest failure?

Why would Palpatine not simply create a more loyal army? If you can secretly embed Order 66, making these clones turn around and murder their Jedi generals, why not throw in a few other orders as well? Perhaps Palpatine should have created Order 67, which told the clones, “You have to follow the orders of all Imperial officers, no matter what.” That would have come in handy, right?

The Bad Batch is continuing the work started by The Clone Wars of humanizing clones. This is interesting thematically; logistically, though, it makes Palpatine look like an idiot. If the clones were preprogrammed to murder the most heroic warriors in the galaxy, it seemingly would have been easy enough to program them to love the Empire, too.

The Bad Batch airs new episodes on Disney+ on Fridays.