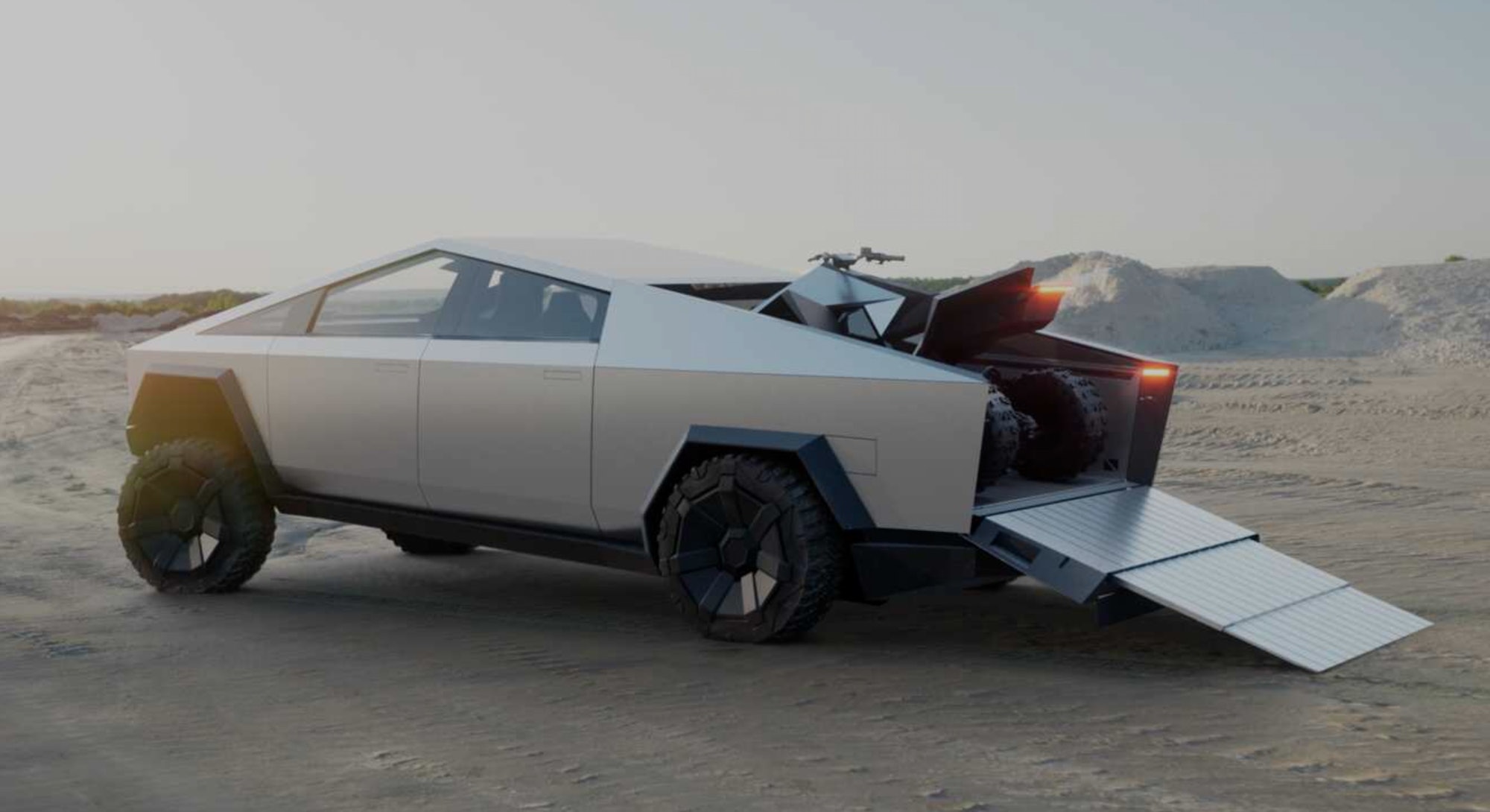 Elon Musk said that his company Tesla’s Cybertruck would look like nothing else on the market, and both his critics and fans can agree on one thing: promise kept.

Associations with the term have given the truck an air of intellectual daring. EV website Electrek observed recently that the design of the truck seeks “to obliterate the automotive status quo.”

That might be true, but according to one of America’s leading brutalism experts, that’s not enough to earn the term.

London’s Barbican Estate: one of the largest examples of Brutalist architecture.

Mark Pasnik is a founding principal of the Boston-based design firm OverUnder and a professor of architecture at Wentworth Institute of Technology.

Pasnik is a huge fan of brutalism, which he has tried to rehabilitate in a book he co-authored, Heroic: Concrete Architecture and the New Boston, in which examines some of the most famous brutalist buildings in America, including Boston’s City Hall.

He’s not necessarily opposed to the Cybertruck either, which he tells Inverse is “in no danger of being mistaken for beautiful.”

But being beautiful, he says, can often result in “boring,” and invokes the Italian theorist Umberto Eco in saying that so-called ugliness can offer an“infinite range of possibilities.”

The willingness of Tesla to abandon the traditional rules of trucks “is jarring, unfamiliar, and strangely alluring” in Pasnik’s eyes.

And, Pasnik says, “on the surface, there are some resonances between the Cybertruck and widely held perceptions about brutalism.” For one, there’s the grey, the bunker-like characteristics of concrete buildings and Tesla’s new vehicle.

A 1955 essay by British historian Reyner Banham, “The New Brutalism,” attempts to lay down three guidelines: “memorability as an Image; clear exhibition of Structure; and valuation of Materials ‘as found.’”

The Cybertruck passes some of these requirements, Pasnik says. It “presents a geometrically memorable image, much like many brutalist buildings. The truck’s exterior material is cold-rolled stainless steel, which appears to be shown in its raw state the way brutalist architects would display raw concrete (the term brutalism is often described as originating in the French phrase “beton brut,” or “raw concrete”).

And lastly, the truck’s steel exterior forms an exoskeleton. It is both enclosure and structure, something the architects of the 1960s found attractive about concrete — it could be both as well.”

But Banham and his fellow brutalists had a purpose behind their intense design, something more than just a building.

And on this, Pasnik, argues, the two groups — Brutalists and Tesla designers — couldn’t be more different.

Is the Cybertruck an example of brutalist design?

“The intentions and ideas behind the truck and those behind brutalism could not be more divergent,” he says. “The truck is consumerist, whereas brutalism’s monumentality is civic. The truck’s boldness serves the bravado of an individual, whereas brutalism’s visual power was meant to project the shared dignity of the public realm.”

Brutalist architecture hopes that those who witness will see an expression of civic society. Brutalist architects like the husband-and-wife team of Alison and Peter Smithson saw their buildings as chance to speak to the power of the work that went into building massive structures, like national libraries and public housing.

“Although there is a popular myth that they were designing defensively, the architecture’s monumentality was actually conceived as a testament to the importance of civic life in the age of Kennedy’s New Frontier and Johnson’s Great Society,” Pasnik says, referring to the wide-ranging social programs of the two presidents. “The public realm deserved honest, bold, and powerful architecture in contrast to the slick architecture of the global corporate scene.

But the Cybertruck “denies many of the characteristics of its construction — we don’t see any bolts or gaskets or other details of joinery. Brutalist architects would never allow this. They wanted the method of making and the assembly of parts to be legible — to be put on display as a way of being vividly honest. This was a core principle, and the sleek machined quality of the Cybertruck is ultimately a disqualifying characteristic.”

While the Cybertruck design is harsh, it is also smooth. Seamless design, making an object’s inner workings as mysterious as magic, has been a staple of tech since Steve Jobs introduced the iPod.

But brutalism isn’t magic, Pasnik says. The Cybertruck “cannot be brutalist because its polished exterior suppresses the brute realities of what it is and how it is made.”

The Economist building in London, designed by brutalist architects Peter and Alison Smithson.

Of course, just because the original Brutalists set out to make utopian projects celebrating the public doesn’t mean that the public appreciated it. Brutalist buildings have been met with harsh resistance. In 2008, an online poll called Boston City Hall the ugliest building in the world, saying that the building “gets routinely criticized for its dreary facade and incongruity with the rest of the city’s more genteel architecture.”

Brutalist buildings are routinely tagged as “soulless,” “totalitarian,” and, in the words of urban policy magazine City Journal’s editor, Theodore Dalrymple, can feel “designed to overawe, humiliate, and confuse any human being unfortunate enough to try to find his way in it.”

Brutalist buildings in Boston, London, Soviet-era Bulgaria, and other frigid environs have not aged well because concrete, the lifeblood of the movement, does not handle cold climate optimally. Water streaks, moss, and rust on metal reinforcements have all taken their toll.

The design meant to overtake old styles quickly became outdated, becoming [equivalent with] urban decay in the eyes of many. Pasnik says the original brutalists are “a bit like many mythological heroes who aimed to achieve something great, they were overconfident and ultimately stumbled in their hubris.”

The brutalist decay soon presented itself in popular movies. The production design of films like “Blade Runner (1982, design by Syd Mead) or A Clockwork Orange (1971, design by John Barry) often relied on an image of modern architecture in the opposite way it was intended, as a critique of an aging modernism as dystopian rather than utopian, totalitarian rather than democratic,” Pasnik notes.

Both of these films, particularly Ridley Scott’s Blade Runner, have developed popular style cults. The American Society of Cinematographers recently released their list of most influential films of all time, and Blade Runner finished second, behind only Lawrence of Arabia.

Although it was a box-office flop, the film developed fans in all the right places, including sci-fi visionaries like Guillerimo del Toro and William Gibson.

Syd Mead, who was given the title of “visual futurist’ on Blade Runner, was tasked making a dystopian world where fires explode randomly Los Angeles, privacy rights are a far-off afterthought, companies build pyramids to attest to their greatness, and sentient robots have to fear getting murdered.

“What I do is to think about why things are the way they are now, combine that awareness with how things were, are now and may be brought into reality,” Mead said in an interview in 2003. “This defines the look’ of ‘future’ stuff. My scenarios are fanciful guesses that are the result of combining several layers of awareness and supposition.”

The fanciful guesses became embedded within popular culture, updating the optimistic movie-future past with something dark, dangerous, and mysterious. Blade Runner’s Deckard, a police officer, navigates a world of sex, drugs, and replicants. For the viewer, alongside the protagonist, Blade Runner’s world isn’t a danger as much as it is a puzzle waiting to be solved.

The Cybertruck plays up the mystery, Pasnik says. It’s “pyramidal form seems from some lost civilization, while its ultra-sleek integration of lights and lack of familiar elements like mirrors resonate with spacecraft from science fiction. We can’t precisely determine if its design is from the ancient past or an alien future, a confusion of time often used in dystopian films.”

" The Cybertruck hails a response to response

The aesthetic critique of Blade Runner and others “has faded and been invented yet again,” Pasnik says, “with Tesla co-opting a dystopian image to create something commercially desirable. It’s the equivalent of a cultural somersault.”

It’s not brutalism, nor is it a response to brutalism. Rather, the Cybertruck hails a response to response, one where purchasing the right to being a protagonist of a dystopia seems better than being one voice amidst many in a grand commons. It’s something new. If that new something will be a success, Pasnik says, “only time will tell.”