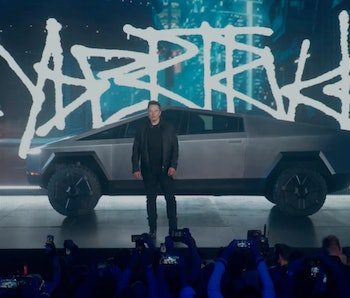 I don’t particularly like Elon Musk as a person, but in October, I bought (well, leased) one of his cars. I didn’t want to drive a gas-powered car anymore, both because fossil fuels are destroying the planet and because I am extremely lazy and tired of having to stop somewhere and put gas into my car. I ended up with a Tesla because there is literally no other car like it on the market — both in terms of how it performs in regards to range and drive, and how advanced its internal design and operation is. It is a once-in-a-lifetime, industry-defining vehicle. It really has no competition. My only problem with it, really, is that it looks too much like a regular car.

You can hate Elon Musk, but you can’t deny that he did something no other person in the history of mass-market automotives has been able to do: he made an electric car that not only works better than gas-powered ones, but is a car that people actively desire. As terrible as the man may be on Twitter (I have firsthand knowledge), it’s undeniable that his vision on electric vehicles has changed one of the largest industries on the planet for good. Just look at all the major brands — like Ford and Mercedes — currently trying to play catch-up.

Last night, Musk unveiled his latest creation: an audacious, polarizing, massive new vehicle called the Cybertruck. Like the bastard child of a Delorean and a Hummer, the Cybertruck is a radical new vision for what a car or truck should look like, carrying little of the legacy of design that audiences have been conditioned to believe is the only way to make a car. It is at turns monstrous, sleek, futuristic, brutalist… and absolutely original.

Here’s the unspoken reality that the Cybertruck is crashing into: most cars are actually quite ugly. There aren’t a slew of vehicles that look legitimately good or smart or are thoughtfully designed. They have been produced in volumes too large to count, in varying configurations that are mostly similar. Cars are almost universally unattractive, unoriginal, and aesthetically uninteresting. It is in large part their sameness and repetition of old ideas that makes them ugly. Very few chances are taken. Very few brazen designs are asserted.

Oh, companies roll out concept cars with striking new ideas at auto shows, and then release a watered-down, focus-group-tested version several years later (if ever) that fails to inspire. As a result, we’ve watched slow mutations of largely the same product: a truck, a sedan, an SUV, a van. Your modern day Volvo is practically indistinguishable from a Honda.

The Cybertruck breaks that cycle quite clearly. It is the concept car, except you can buy it. It doesn’t seem to be concerned with whether or not it captures the essence of a Ford F-150 or reminds you of the flatbed your parents owned. It is a design of this moment, one capturing the apocalyptic mood and needs of our current world, reflecting modern pop culture in a way that’s never been achieved in a car, and perhaps most importantly, reinventing what performance and utility might look like for a whole class of vehicle.

Is it ugly? Maybe. But lots of things are ugly until they’re not. The original iMac. The Beetle. Yeezys. The world is filled with objects that at first viewing repelled you. Graphic design is awash with examples of this kind of evolution. In Paul Rand’s age, the work of The Designer’s Republic would have been met with revulsion, and today brutalist web design has become the norm, while a decade ago the web 2.0 world of clean and white simplicity would have balked and choked on the mere idea. Modern sneakers in particular — many of which are pushing the boundaries of shape, material, and texture — would have shocked Chuck Taylor. But design should be a lot more shocking.

It’s easy to laugh at something you don’t understand. It feels good to mock things that look strange or alien to you. Armchair design critics all over Twitter are getting their shots in right now, but they’re missing the point. The Cybertruck is trying where few if any have ever tried, and like the original Tesla — which no doubt some of these same critics would have been quick to take a shot at — it’s the very audaciousness of the idea that could actually make it work.

Of course, the Cybertruck may fail. It may be the next DeLorean. But if any human on the planet can turn an audacious idea for a car — a car that might upend an industry — into a viable reality, history thus far seems to suggest it’s Grimes’ boyfriend.

More like this
Innovation
5 hours ago
Can cars run on water? The science of a TikTok conspiracy theory, explained
By Andrew Moseman
Innovation
6.24.2022 5:00 AM
Beam-steering radio technology could help autonomous cars finally hit the road
By Sascha Brodsky
Entertainment
12 hours ago
25 years ago, Nic Cage made his most explosive sci-fi movie ever — it was almost even better
By Jake Kleinman
Related Tags
Share: