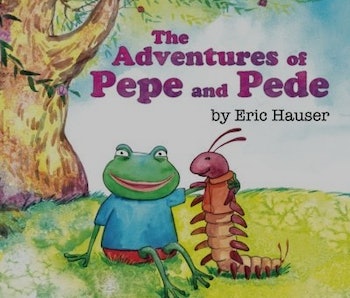 An assistant principal at a Texan middle school lost his job this week after a children’s book he penned (and peppered with alt-right imagery) generated controversy online.

The protagonists of The Adventures of Pepe and Pede are freedom-loving farm inhabitants of Wishington Farm (nice!) tasked with reclaiming the pond on their farm from the clutches of an evil, white overall-clad alligator named Alkah. Alkah’s minions are apparently designed to implicitly show women dressed in niqabs, and Alkah himself looks like an imam.

The author, Eric Hauser, received criticism from both his coworkers at Rodriguez Middle School and parents of children attending the school where he worked, according to sources interviewed by Motherboard.

“The story itself is despicable, racist, and xenophobic. I was disgusted by it,” Chad Withers, a drama teacher at the school where Hauser worked, said. “I’ve never seen anything before that was so obviously targeted propaganda to children.”

Pepe became a mascot for the white nationalist movement, as one of the alt-right’s most prominent recruitment tactics involves indoctrination via memes. And Trump supporters refer to themselves and one another as ‘pedes’ on forums like r/The_Donald in reference to a bad dubstep song by Knife Party that appeared in many pro-Trump videos during his campaign.

The insidious, anti-Islam message behind The Adventures of Pepe and Pede recalls the anti-semitic propaganda fed to German children through books commissioned by the Third Reich.

Though German propaganda was state-commissioned, while Hauser’s book was initially published independently, and often more explicit in naming the Jews, Hauser and German propaganda writers both employed thin metaphors and adopted the trappings of a fairytale in order to convey the same message: A certain small but powerful minority group presents a threat to the security of the masses.

The most famous piece of German children’s propaganda was called The Poisonous Mushroom. It was written and published by Nazi propagandist Julius Streicher, who also began his career as a schoolteacher and administrator.

In The Poisonous Mushroom, a mother and son pick mushrooms in a forest and say really awful shit about Jewish people, like, “Just as a single poisonous mushroom can kill a whole family, so a solitary Jew can destroy a whole village, a whole city, even an entire folk.” It is a heavy-handed, artless mess, and like the pond-cleansing that takes place in The Adventures of Pepe and Pede, Streicher uses environmental contamination as a metaphor for undesirable culture-mixing.

Trust No Fox on Green Heath and No Jew on His Oath, another piece of Nazi propaganda, was written by Elvira Bauer but became more famous for the offensive caricatures of Jewish people that comprised its illustrations. The pictures, according to Mary Mills, were meant to highlight “a pre-conceived contrast between the German and the Jew, their history of animosity, and the establishment of a justification for the German war against the Jews.”

The illustrations for The Adventures of Pepe and Pede were, according to the artist who Hauser commissioned to draw them, based on a web comic’s depiction of Muslim women in niqab, and Alkah the alligator was supposed to be wearing a long white robe until his character design was altered, according to Motherboard’s interview with the illustrator.

The indoctrination of children is one of the first steps towards altering the perspective and tolerance level of society as a whole. The backlash against Hauser’s book was fast and powerful enough to remove him from a position where he’d have access to young minds, but The Adventures of Pepe and Pede is yet another parallel between German’s descent into fascism and our current political climate, and that fucking blows.