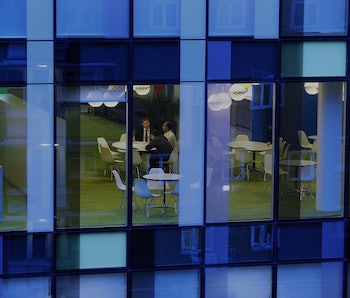 Clearly, business buzzwords and phrases like “leverage,” “best practices,” and “giving 110 percent” suck total ass. These expressions are — from what I understand — the only thing you learn in MBA programs besides how to shake your classmate’s CEO dad’s hand firmly and how to identify various yachts by the makeup of their kitchen staff alone. But even as corporate jargon gets a terrible, horrible, no good, very bad rap, some of it can prove useful. What follows is a list of phrases that are permissible for use — if you must.

Now, here’s one I learned in a philosophy of science class (a.k.a. where the now-poor kids were studying). It goes back to Thomas Kuhn’s The Structure of Scientific Revolutions: Said given revolution eclipses what came before. It is, of course, mostly used incorrectly now — mostly by VPs who use a lot of mousse in their hair — but it reminds me of a time when I was better at something than the business majors: school. Since then, there’s been a bit of a paradigm shift.

This, ahem, creative way of saying “to reveal information” might be crass, but that’s what makes it fun. Some might say that this phrase is misogynistic, but Japanese men wear kimonos, too. That’s equal opportunity nudity referencing right there.

Short for “make hay while the sun shines,” this tidbit goes all the way back to the 16th century and John Heywood’s proverbs. It means to be productive or take advantage of an opportunity while it lasts. Plus, it allows you to teach your children a history lesson about what time farmers used to have to wake up when they’re bitching about getting up for school.

“Scalable” is an amorphous definition that usually defines a business that doesn’t require many additional resources to increase output. “Gotta scale up, bro!,” is something someone in the Silicon Valley just said while you were reading this sentence, before slapping another dude dangerously low on his back. I like to think that reptile ranchers and Mettler Toledo have fun with this one.

Trying to boil the ocean would be a waste of time and that’s exactly what this phrase means. We’ll have to wait and see if climate change makes this saying prophetic and, therefore, irrelevant.

This is a part of a business dedicated to specific people or groups. It’s a niche and mostly makes me think of niche and totally radical surfing, climbing, and extreme skiing movies from the ‘90s and aughts. Whoa.

If human beings could end meetings, coffee dates, or award shows on time, we could just go with “stop” or “end.” But since we’ve been constantly unreliable to the point of tedium, we’re stuck with bosses saying, “This meeting has a hard stop at noon.” That’s fine with me; meetings are the worst. Hard stop all meetings before they even begin.

The next time your boss asks for a ballpark figure, no worries. I looked up the largest MLB ballpark: It’s Dodger Stadium, with a capacity of 56,000 L.A. fans who will straight-up stab you through the ear with a tire iron if you wear a San Francisco Giants hat. That means you just need to be within a margin of error of 56,000 and you’re good to go. “How many tables do we need for the event? Probably like 10,000 or so. Just a ballpark figure.” This works for salary negotiations as well.

An easily obtainable goal is always worth smiling about. Better yet: The image of an antediluvian time when people were sustained by nature — prancing around naked and what-not — feasting on fruits that hung low. Then, of course, along came some overachieving prick who wore two fig leaves instead of one and always went for the fruit at the top of the tree. Because he made everybody else look bad, they had to start eating mid- to high-range fruit, eschewing the low-hanging fruit that was right there the entire time. This man is the ancestor of every kid who raised his or her hand too much in school and is now your boss.

Eating your own dog food

This one refers to using a company’s own products for testing and marketing purposes and may or may not go back to old Alpo ads. And while it’s come to mean, say, an Apple employee using an iPhone, corporate America will never be as badass as Mad Max eating dog food (or badass, in general).

For real? Something tells me this one is more widely used across the pond where the c-word takes on a more jocular tone. I, for one, fully support the boardrooms of the U.S. swapping acting a fool with this, though. See? Word.

A wheelhouse is the part of a boat that provides shelter for the person steering. That comfort zone moved on over to baseball, where it became slang for the area where a hitter does best. “That’s in my wheelhouse!,” sounds a lot cooler when Yasiel Puig says it as he smashes a ball 400 feet than when Chuck from accounting says it about calculating the company’s profit and loss statement. But, let Chuck have it. Maybe he’ll do your taxes.

Changing the course of a company decision — or the company, as a whole — isn’t exactly what I thought I’d be thinking of as a “pivot” when my basketball coach used to teach me how to plant a foot to move around the box. I’ll just let Ross take it from here:

There’s the image of blood-stained soldiers on the shredded battlefields of the Civil War receiving impromptu surgeries with nothing for pain besides, maybe, some whiskey and a bullet to bite down on. If nothing else, this picture should imbue Armani-suited, glad-handing, coddled modern workers with a sense that their sacrifices are relatively small. It probably won’t, but a man can hope.