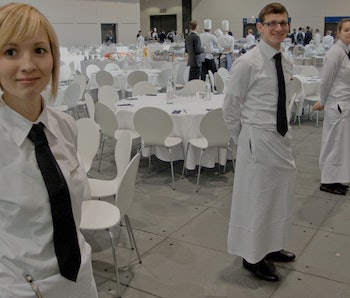 The width of your waiter can determine how much you end up ordering in a restaurant, a current study reports.

At first, such a study might seem somewhat mean—trying to suggest that heavier servers are responsible for those times you gorged yourself on extra this, more of that, of course I want to see the dessert menu…

Instead, the research article titled The Waiter’s Weight: Does a server’s BMI relate to how much food diners order? (published by Tim Döring, research associate at the Chair of Marketing of Göttingen University, Germany and Dr. Brian Wansink of the Dyson School of Applied Economics and Management at Cornell University in Ithaca, New York) makes mention of the advantage for a restaurant to have staffers that encourage increased orders, stating “There have been several lawsuits within the past couple of years regarding weight discrimination of employees in bars and franchise restaurants. This research shows that heavy wait staff does not have to be a liability for business. If anything, heavy weight staff might increase sales.”

However, the study’s main focus is on what environmental cues may entice a customer to eat differently once in a dining setting. Co-author Tim Döring explained to Inverse from his home in Germany that the goal was to get data direct from actual situations, explaining that “We really wanted to go in real restaurants and observe real interactions between diners and servers, because we want to understand what influences food choices and consumption volume in real life settings such as supermarkets or restaurants.”

Several influences and possibilities were measured. The study took place in 2013, observing random customers as they entered a restaurant—and the eateries used as observation points ranged from chain restaurants to small spots—covered by 20 researchers who watched the behaviors of 497 people (in the U.S., Spain, and France).

After observation across this wide platform, as the article declares:

“Diners ordered and consumed significantly more paid meals if served by a heavy server regardless of their own body type.”

Döring says he was “definitely surprised by the magnitude of the findings,” adding, “What I found most interesting: the odds of ordering dessert increased by almost four times if the diner was a heavy person (with a Body Mass index above 25) compared to a slim person (BMI below 25). About the same increase was observed if a diner was served by a heavy server (again, BMI above 25) compared to a slim server (below 25), regardless of their own weight!”

The conclusion reached is that a customer may feel more in-tune with eating in the presence of a heavier server of food as that person—not purposefully but effectively—also serves a social norm that OKs exaggerated eating behavior.

It should be noted that the article does admit that this sort of observational research “does not allow us to draw clear causalities. It can just be speculated about the underlying mechanism causing diners to eat more in the presence of overweight wait staff.”

The study also does not infer that one shouldn’t dine out, but instead be wary of cues when in a social setting. Döring certainly remains a supporter of eating out—and furthermore believes there is more to learn from observation and the environment of a restaurant: “I do not think this study really changed my feelings toward dining out because in general I am very interested in environmental factors that influence one’s eating behavior—this is why I want to earn a Ph.D. in consumer behavior. Another study I am working on right now is about the position of a table within a restaurant and possible influences on the eating behavior, very interesting in my opinion!”

That could be good to know the next time a waiter asks, “Booth or table?”

More like this
Science
Jan. 21, 2023
Can spicy foods cure colds? A neuroscientist reveals the encouraging truth
By Elana Spivack
Mind and Body
Jan. 23, 2023
Cutting back on deli meats may lower your risk of this chronic illness
By Elana Spivack
Science
Jan. 19, 2023
Time-lapse shows shocking temperature changes between December and January
By Jennifer Walter
LEARN SOMETHING NEW EVERY DAY.
Related Tags
Share: