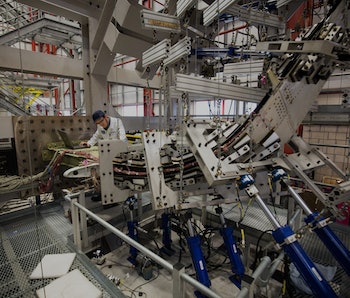 The institution most open to publicly mulling these issues is the Franklin W. Olin College of Engineering, a small, elite, and adolescent (it’s 19 years old) school hiding in the Boston suburbs about a 15-minute drive from Cambridge. When the private university opened, promising students it would connect concepts to real-world challenges and emphasize radical change, it was already competing with established colleges like Harvey Mudd and MIT. Today it’s ranked by the Princeton Review as number one for best classroom experience and is tied for third in the U.S. News & World Report for best undergraduate (non-doctoral) engineering program. Olin College shares the spot with the United States Military Academy — and has about 4,044 less students. It is a massive, if largely unheralded, success story. And at the core of that success are the mechanics of emotion.

“I think that at the end of the day, the thing that makes Olin special — and the thing that gave me hope that we could spread what worked to the University of Illinois — was that that they created a culture of trust and empowerment with their students,” says Goldberg to Inverse.

David Goldberg, who works as an educational consultant and next wave prostelytizer, wrote the book, A Whole New Engineer, on Olin — with help from Olin Physics Prof Mark Somerville. “When we think of engineering, we think of science as being very rational — and it is,” he says. “But at Olin there is a sense that the primary emotion is love and engagement for the work.” He says that, in some ways, the school’s culture was created by accident in a lab. When the university went to open its’ doors it turned out that some of the buildings weren’t ready yet — but they already had a number of applicants. So what they did was admit what they called “partners” — 15 men and 15 women whose responsibility wasn’t to attend school, but to help faculty build an institution worth attending.

“They really created something different,” says Goldberg. “When you look at the buildings, they’re great; there’s some fabulous elements to the curriculum — but I think that the key to what makes Olin work is this culture.”

Predictably, Olin’s culture is a product of its enterprise engineer: Faculty members never get tenure and are assessed on how they help students, not on personal research; students are encouraged to collaborate with their professors and each other however they want. People talk about the “Olin way” and they mean “transparently” and “in the spirit of inquiry.” Often the practical concepts of a subject are taught before the theory behind it and much of the curriculum comes back to this idea that the fundamental purpose of engineering is to design and create systems that will help people.

“At Olin there is a course called User Oriented Collaborative Design, where students are assigned a cohort of people and their job is to study these people and make a proposal for a conceptual design of a technology that might help these people,” says Goldberg. “This class teaches students to make the connection between people and technology. Technology is for people — it starts from human needs.”

Other Olin classes encourage students to create a product with limited resources and make it work in the marketplace; there is this emphasis on business concepts and the values within the market. This sort of engineer, who practically looks to see what will work outside of a theoretical perspective, has been what Olin has hoped to create from the start — when first making the case why students should choose Olin they advertised that “the major innovative technologies, who would hire the next generation of graduates, agreed that this was the future of engineering.”

Goldberg says Olin matters because being an engineer now is not like being an engineer around the time of World War II or even during the Cold War. This is, he emphasizes, a good thing. Students are being given new opportunities to do what they want to do. The upside of there no longer being a clear path for young people is that they don’t have to follow a path at all. That’s old news in the humanities, but it’s radical for STEM students.

“At one point it was important for engineers to sort of be obedient, come in, and do what they were told — sit at drafting boards and do kind of tedious calculations their bosses didn’t want to do, but which are now mostly done by computers,” says Goldberg. “Now we want more entrepreneurial engineers, instead of the engineer that shuts up, sits down, and does what they’re told. We want somebody that is going to go out and create some fabulous piece of technology we can’t live without.”

But finding and mentoring these would-be engineers is getting more and more difficult. One problem is that the technical training of engineering became too narrow and, frankly, uninspiring. If that sounds like a bold claim, it isn’t: Roughly 50 percent of U.S. engineering undergraduates abandon their degree programs. There’s also the fact that, historically, children growing up in affluent places are less likely to pursue engineering jobs. This is a good problem to have (and one that China is just now seeing emerge).

The good news for all of us who enjoy the benefits of engineering like say, cars and cyber security, is that more and more institutions are trying to go the Olin way. One of Goldberg’s many jobs is to consult universities around the world on how to revamp their culture for engineers — two examples, he says, that are beginning to find success are the higher education institution Insper in Brazil and the Universidad de Ingeniería y Tecnología in Peru. And major universities are beginning to make changes as well, although the challenge is a bit more potent when trying to change an existing culture rather than create a new one.

The days where engineers were only hired for their expertise are gone. Gray flannel is very last year. Olin graduates do have to leave the Olin way behind, but they do so to enter a world that is increasingly interested in more than what they can do. They’re entering a world where what they feel like doing actually matters.