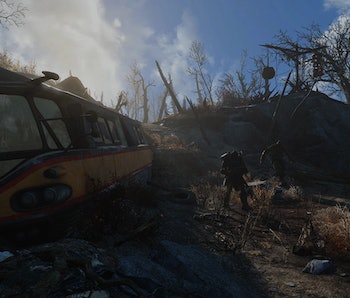 Fallout 4 has been with us for a few months now; allowing players to explore post-apocalyptic Boston to their utmost content. Since the game’s release back in November, the modding community has been working diligently to create fixes and additions to the game on PC despite lacking the official mod development kit — and they’ve come up with some great stuff, available only to those playing Fallout 4 on PC.

But that’s about to change.

Originally announced back in Microsoft’s E3 2015 press conference, the decision to add mod support for Fallout 4 on consoles is something that many at Bethesda have been wanting to do for years — and something that console owners have been looking forward to as well. Not only did Bethesda promise to give console owners access to the hundreds of mods available on PC, but they said they’d do so in an easily accessible way.

While we still don’t have any specific details as to how they plan to do that, it’s safe to say that more details and an official release are on the horizon. With 2016 comes the release of the official modding toolkit, which means mods on the Xbox One probably aren’t far behind.

Certainly, there are plenty of great mods available — but here’s a few we at Inverse hope to see make a debut on Xbox One when console mods arrive later this year.

Dialogue has always been a huge part of the Fallout universe, allowing gamers to play their character a specific way, whether it be good, evil or a mix of both. We’ve always played as a silent protagonist, but Fallout 4 aimed to change that by introducing a fully-voiced male and female protagonist — only thing is, they seemed to skip a bit on the dialogue. Previously we had entire lines of dialogue, while in Fallout 4 we only get summaries, which don’t accurately represent the lines of dialogue hidden behind them. That’s where Full Dialogue Interface comes in. This mod offers a variety of configurations that showcase entire responses, which allow you to skip the paraphrased nonsense from the base game and pick responses as they are spoken by your character.

Crafting is one of the biggest systems behind Fallout 4, allowing you to create hundreds of modifications to your weapons and armor, as well as providing you with an avenue to craft explosives and medicine. However, it doesn’t give you the ability to craft ammunition, a huge part of the previous installment, Fallout New Vegas. Craftable Ammo aims to fix that by providing players with the ability to craft ammunition for every weapon in the game. The mod locks some of these ammunition types behind perk requirements for balance and provides you with a few different variations to use too, making it friendly for any type of playthrough.

Stackable Concrete Foundations is a simple and to-the-point mod that makes settlement building in Fallout 4 a little bit easier. In the base game, you can’t stack foundations on top of each other when building houses and structures — which leads to plenty of frustration. This simple tweak allows you to do so to your heart’s content.

It’s no secret that those who inhabit your settlements in Fallout 4 aren’t varied and require a lot of babysitting. Better Settlers aims to change that by providing a much more varied cast of settlers to inhabit your communities. It also makes your settlers tougher by spawning them with better weapons and gear on occasion, giving them a much better chance of surviving attacks on the settlement without your intervention.

If you’ve been building up settlements in Fallout 4, odds are you’ve exhausted all of your options - and Homemaker is working to change that. Homemaker is another settlement mod that expands your building options by adding over 800 new objects to craft. These objects range from refrigerators to cars and include a variety of new building sets to play with like those from the Institute and Raiders. You’ll also be able to stack walls, snap building items together easier, and place planters for all of your crops.