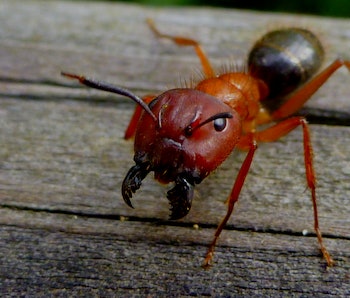 The caste system of an ant colony has more purpose than providing inspiration for competing ‘90s movies about neurotic insects. Division of labor maximizes each colony’s chance to thrive. Recently published research makes the case that what underlies this system is epigenetics and that, with some brain alterations, the roles that predominantly environmental factors have induced can be reversed: The brawny soldier ant can begin to forage just like it’s scuttling cousins. Scientists can control ant behavior Paul Rudd-style — albeit without the Ant-Man shrinkage.

Over the course of a life, organisms are exposed to environmental factors that cause chemical reactions to activate and deactivate parts of the genome at strategic times. This process, which helps determine how DNA is transcribed into proteins, is called epigenetics and is hypothesized to be the source of the many biological phenomena unexplained by pure genetics.

The team of researchers behind this recent study realized that through epigenetics they could change the behavior of ants — specifically, major ants (the soldiers) and minor ants (the foragers.) While these ants share the same genes, whether they act like a major or a minor ant is determined by which genes are turned on and off. So, the researchers treated the brains of young majors with a compound that modifies the proteins that affect whether other proteins can access DNA and how tightly DNA is coiled. This process allowed them to turn on the genes linked to the foraging behaviors of minors in the bodies of the majors.

The research team was only able to modify the behaviors of ants in their first few days of life — a factor thought to be caused by the plasticity of young brains — but the majors treated to act like minors continued to display the changed behavior for 30 to 50 days after the injection treatment. The ant’s physicality were not affected by the experiment.

“These results highlight the lasting influence of nurture over nature, for complex traits like behavior and how turning a few genes, on and off via epigenetics, can strongly affect an individual’s character,” said co-author Daniel Simola in a video explaining the experiment.

Shelly Berger, also a co-author of the study, told Gizmodo that it’s so far very unlikely that this experiment bodes for a world where human’s genes can be manipulated in similar behavioral way — at least, in the way that Berger and her team were affecting genes. She says that this study is more about “getting cells in the body to do different things” rather than producing outright mind control and, besides, the differing circulatory systems between ants and humans would be a huge barrier in a mimicking experiment.

Still, Berger and her team propose that the findings of this study can be applied to other euosocial insects — the critters whose societies are highly organized, like honeybees. And epigenetics could possibly explain other ant behavior, like why queen ants live so much longer than the workers. Gut says because girls rule the world, but science will have to weigh in.