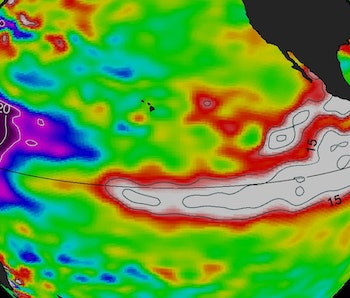 This year’s El Niño is a monster, and it’s still growing. The warm blob of water in the equatorial Pacific is currently twice the size of the continental United States. Appropriately, it’s also going to make weather in this country totally unpredictable this winter.

While El Niño events generally occur every two to seven years, the planet hasn’t seen one of this magnitude since the winter of 1997-1998, when it fed a freak ice storm that wreaked havoc on upstate New York and parts of Canada, leaving thousands without heat or power, and causing billions in damages.

This year’s El Niño has already caused extreme weather in other parts of the planet. A few months ago Indonesia’s peatlands were smoldering and emitting a toxic haze over citizens and neighbors. It was the worst fire season the region had seen since (you guessed it) 1997.

El Niño has also been implicated in heat waves in India, droughts in South Africa, flooding in South America, and hurricanes in the Eastern tropical Pacific, according to NASA.

For the United States, though, the worst is yet to come. The biggest effects are expected this winter, although it’s hard to say who exactly is going to get hit, and with what.

Weather is of course fundamentally chaotic, and it’s hard enough for the pros to get a handle on what’s going to happen later today. But like any game of chance, there are probabilities at play. Here’s how NOAA predicts this El Niño will affect rainfall in the coming months:

The weather is expected to be wetter than normal across the most southerly states, especially in California, Arizona, New Mexico, Texas, and Florida. On the other hand, it will probably be drier than normal in the northwest and around the Great Lakes.

Temperatures, meanwhile, are expected to skew warm across the northern half of the country and the West Coast, while Texas might be a little chillier than normal.

Will the confluence of these factors mean snow storms in Texas and a dry January thaw in Michigan? Maybe, maybe not. Even with all of NASA and NOAA’s computing power, there’s still at least a one-in-three chance that conditions go in the opposite direction. Because weather.

What you can expect, though, is the unexpected. The gigantic El Niño plus the intensifying effects of climate change means that things are definitely going to get weird somewhere. If you don’t have your emergency kit ready yet, add it to your New Year’s resolution list. And go buy some flashlights and batteries.