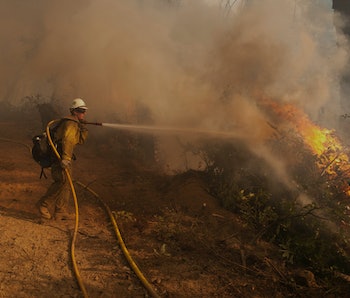 The planet is getting warmer. Weather is getting crazier. It’s easy to shrug and say “climate change,” but it’s a lot harder to understand why it’s actually happening.

This week the Bulletin of the American Meteorological Society released its analysis of 2014’s extreme weather events, and whether or not they can be conclusively linked to climate change.

The report is pretty long, so here are the headlines:

This one is the easiest to explain. Burning fossil fuels causes the greenhouse gas effect which causes averagely warmer temperatures around the globe.

In one paper, the scientists divided the world into a grid of five degrees of longitude by five degrees of latitude, and analyzed the temperature records for that space. In 2014, almost the whole planet was hotter than normal. Twelve percent of the areas analyzed were warmer in 2014 than ever before. Nowhere set a cold record.

“The connection between a warming climate and lengthened fire seasons may seem intuitive, given the general tendency toward a hot-and-dry climate scenario and an earlier snowmelt,” write the authors of one paper in the report.

But it’s hard to tease out what part of the 2014 season — which saw the most extreme fire risk ratings on record — was caused by climate change versus natural climate variability. The researchers conclude that, in general, human-caused global warming is amping up the risk of forest fires in California, but they hesitate to conclude that the 2014 season was specifically caused by climate change.

Climate change is likely making for bigger storms, but the evidence is still sketchy

Storms are chaotic weather systems, and as such they are always a product of chance. But there’s mounting evidence that a warming planet is causing bigger storms to show up more frequently.

Hawaii saw an unusually big hurricane season in 2014, with three big storms approaching the islands. Researchers found that climate change is partly to blame, because changing ocean temperatures have pushed storm paths closer to Hawaii. But El Niño played its part, too. They conclude that the future might see more years like 2014, although natural variability is still going to be a big factor.