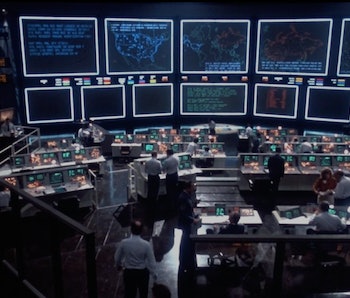 Sixty years ago today, a little girl from Colorado Springs accidentally called the Continental Air Defense Command Operations Center with a question: Where was Santa?

Back in December, 1955, local newspaper had printed a Sears advertisement that promised to locate the whereabouts of Santa Claus for curious kids. Whoever put in the phone number got it wrong though, because the number went straight to the federal government command center.

Luckily, Colonel Harry Shoup, on duty that night at CONAD, was feeling more festive than he was grinchy. He instructed his operators to relay Santa’s precise location to the expectant, inquisitive children. And thus, a tradition was born: Each year, kids could call to find out where Jolly Old Saint Nick and his reindeer were.

The tradition continued through CONAD’s transition to NORAD, and is alive and well today. In fact, NORAD now has a website devoted to tracking Santa’s movements, affording parents around the world a big sigh of relief.

The original mishap responsible for the adorable tradition would probably not happen these days. Ads are all online and errors are fixed immediately. Our friends’ newspapers are on the verge of extinction, and phone numbers are generally vetted and correct.

Still, NORAD fields over 40 calls an hour on Christmas Eve, and a squad of over 1,000 volunteers encourage miniature detectives calling in that their beloved Santa is both real and in a precise location. (That would be a fun gig: “Yes, Jane, Santa is currently halfway down a chimney in Stanley, Idaho.” Or, “No, Johnny, Santa is not the one currently emitting cookie-eating sounds from your living room; our system places him in Northern Vermont at this moment.”)

It’s not always easy to incorporate myth into modernity, but NORAD and its volunteers will continue to give it their all. Perhaps they’ll start telling kids that Rudolph is obsolete, too.

More like this
Culture
15 hours ago
8 sensational sci-fi shows and movies coming to HBO Max in July 2022
By Robin Bea
Science
14 hours ago
How are drugs absorbed in the body? The science of medicine, explained
By Tom Anchordoquy and The Conversation
Entertainment
17 hours ago
Ms. Marvel Episode 4 release date, time, plot, cast, trailer, and Disney Plus schedule
By Jeff Spry
Share: