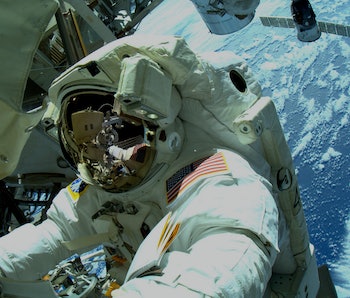 The astronauts have left the building.

Most of the team at the International Space Station may be fresh off the rocket, but the International Space Station Management Team decided Sunday night to order an unplanned spacewalk for Monday to address a stalled component. NASA is live streaming the spacewalk, which began at 7:45 a.m. and is expected to last between three and three-and-a-half hours.

Americans Scott Kelly and Col. Tim Kopra are exiting the ISS to conduct the mission, while Briton Tim Peake and Russian Sergey Volkov will assist from indoors. It will be Kelly’s third time on a spacewalk and Kopra’s second.

ISS directors determined to order only the seventh spacewalk of 2015 after the Mobile Transporter, a multipurpose robotic system that helps astronauts inside the space station provide maintenance and support without entering space, stalled just four inches away from where it was headed in advance of the arrival of an un-piloted cargo rocket Wednesday.

We will be updating this page as more information becomes available. You can watch the walk at NASA’s website.