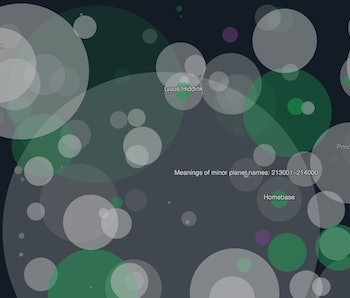 My new favorite band is Wikipedia.

Humanity’s ever-evolving store of knowledge has been rendered as dreamy ambient music with a rather brilliant project called Listen to Wikipedia. The site’s server runs software that monitors the whole of Wikipedia for any changes — additions, deletions, even new users — and uses each event to trigger musical events.

Take a second to listen to this dreamy symphony:

Here are those sounds explained: Bell sounds signify additions to an article, string plucks designate deletions, and every time a new user registers for Wikipedia, listeners are treated to a swell of orchestra strings. The sounds are rather disparate on their own, but in concert (and with help of noise-canceling headphones), this listener can’t help but be transported.

Listen to Wikipedia is a piece of open source software created by former college classmates Stephen LaPorte and Mahmoud Hashemi. The pair met at a Wikipedia hackathon and started Hatnote, a site that features all order of Wikipedia-related information: data visualizations, interactive maps, even a program that will email you the most-edited Wikipedia article of the week.

LaPorte presently works as legal counsel for the Wikimedia Foundation and Hashemi is a developer at PayPal. Hashemi told KQED News that the Listen to Wikipedia project was a welcome distraction from San Francisco tech culture; there’s no money to be made by turning Wikipedia into music, it’s a creative programming practice for its own sake.

You can listen to English Wikipedia edits, or for a more-developed sound you can listen to a bunch of major-language edits all at once. You might also want to take the free Listen to Wikipedia iOS app for a spin.

Whether you give yourself a minute to experience this worthwhile oddity or an hour to immerse yourself in a blissed-out soundscape, it’s only possible because people are perpetually tweaking the internet’s free encyclopedia. Hashemi and LaPorte just wrote the code to harness it.

More like this
Science
8.18.2022 2:27 PM
Wastewater can track viruses like Covid-19 — can it do the same for superbugs?
By Allison Parshall
Innovation
8.15.2022 8:30 PM
This high-tech camera may help protect our identities — here's how it works
By Molly Glick
Gaming
8.11.2022 1:30 PM
Overwatch 2 is ditching the game industry's worst feature
By Willa Rowe
Related Tags
Share: