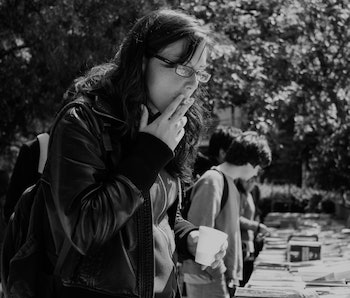 A new study from the National Institutes of Health, tracking trends in teen drug use shows that high schoolers are smoking more weed and much less tobacco. They’re also doing a lot less of the really dangerous stuff — opioid painkillers and synthetic marijuana in particular — than in years past. The report is, to define it in broad strokes, encouraging: The kids are doing drugs better.

“We are heartened to see that most illicit drug use is not increasing, non-medical use of prescription opioids is decreasing, and there is improvement in alcohol and cigarette use rates,” said Nora D. Volkow, M.D., director of the National Institutes of Drug Addiction, in a statement.

The “Monitoring the Future” survey has been ongoing since 1975, conducted yearly by researchers at the University of Michigan at Ann Arbor.

For the first time since then, daily pot smoking has exceeded cigarette smoking among 12th graders, correlating with a decline in the perception that marijuana use is risky. While 36.1 percent of seniors were wary of weed in 2014, this year only 31.9 percent of them believed that regular use could be harmful.

Synthetic marijuana, commonly known as spice or K2, has been on the NIH’s radar since 2011, when 11.4 percent of high school seniors reported using it. Now, that number has dropped significantly down to 5.2 percent. Even 12th grader use of party drugs like MDMA, inhalants, and LSD is down to 3.6 percent from 5 percent last year.

Prescription opioids like Vicodin continue to decline in popularity, with only 4.4 percent of seniors popping the pills now compared to 10.5 percent in 2003.

Though underage drinking rates remain high (quelle surprise!), they’re still continuing to decline steadily, as they have been for over a decade. Binge drinking — defined as five or more drinks in a row within two weeks — hit a peak in 1998 when 31.5 percent of seniors reported doing it and has now declined sharply to only 17.2 percent.

Whether the study shows that kids are actually getting smarter or are just becoming increasingly susceptible to public service and marketing campaigns remains to be seen. Given that it comes on the heels of another highly publicized study showing that people under 30 (men, in particular) are the most likely to end up in the ER because of drug poisoning, the results are bound to bring worried parents and legislators some relief.