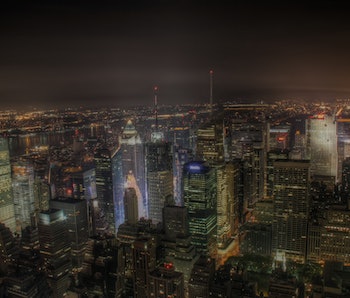 “The future is an exciting place,” mid-century CEOs used to say while gesturing at the 1/100th scale models they used to mark their domains. Yes, they were right, but they were also light on specifics. That complaint cannot be leveled at the corporate prophets of today, who spot nascent markets and believe in them for a living. They are willing to get very specific about the future and, for the moment, about 2016.

We took a look around at what salaried experts and futurists are saying most excites them about the days to come and cherrypicked the most intriguing ideas about next year, the next five years, and the next decade. The world is gonna get weirder, but that doesn’t mean change won’t be predictable.

We’ve seen great strides in cloud technologies over the past few years, but these developments will soon begin to find their way into healthcare. This is both a necessary and enabling advance: the potential is great. Imagine personal health monitors communicating with apps on smartphones that in turn keep doctors up-to-date. As cloud technology develops, so too will doctors’ diagnoses and prescribed treatment regimens. One example: the cloud will allow doctors to “wirelessly monitor patients with sleep apnea, collect information and then tap into a network of experts to devise a treatment plan.” If the cloud is capable of telling a doctor in precise, easily accessible, and decipherable terms just what each patient’s lifestyles looks like, medicine will reach new heights.

IBM predicts that in five years, doctors will be able to work with unprecedented precision. Your DNA will itself be treatable:

Speculative though it may be, a glimpse into the healthcare field a decade down the line is thrilling.

Ray Kurzweil, director of engineering at Google and prolific futurist, believes that 3D printing will successfully merge with medicine. “3D printers will print human organs using modified stem cells with the patient’s own DNA providing an inexhaustible supply of organs and no rejection issues.” He also predicts that we will “be able to reprogram human biology away from many diseases and aging processes, for example deactivating cancer stem cells that are the true source of cancer” and “repair damaged organs with reprogrammed stem cells.”

Dr. Anne Lise Kjaer, founder of Kjaer Global, expects philanthropic gains. “Apps designed by medical professionals will…help to improve the lifestyles and life outcomes of communities in the developed and developing world.” And the promise in this field is not limited to bodily well-being: “What excites me even more is the parallel development of apps that meet our underserved mental health needs.”

Over at Microsoft, big-time thinkers are looking forward to 2016.

In the AI realm, Eric Horvitz, technical fellow and managing editor of Microsoft Research’s Redmond Lab, expects the Siri of tomorrow to be more of a pal with “the advent of fluid, multi-step conversational dialog with machines.” These machines “will be noticeably more natural and competent than the speech interactions we’ve have had with computers and smartphones to date.”

Hsiao-Wuen Hon, the corporate vice president of Microsoft Research Asia, believes that TV will continue to become obsolete — at least in China. “Video distribution on the Web will overtake TV broadcast. More people in China will watch the Olympics through the Web than through TV.”

And Lucas Joppa, a conservation scientist at Microsoft Research, has high hopes for the coming year in the form of “the potential for technology to help avert the 6th mass extinction and transform the way we monitor, model and manage life on earth.”

In five years, IBM thinks, we’ll each have a personal security warrior guarding our information and identity. Meet “Steve”:

Here’s where predictions again get abstract but awesome. (Excuse me while I take a decade-long nap.)

Dr. Michio Kaku, professor of theoretical physics at CUNY, believes — with Mark Zuckerberg — that an at-least primitive form of actual telepathy will be possible. “We will see the gradual transition from an internet to a brain-net, in which thoughts, emotions, feelings, and memories might be transmitted instantly across the planet.” He notes the potential that this achievement would hold for social media, the keeping of history, and even each person’s capacity for empathy.

And what’s now the stuff of science-fiction may just become reality. Dr. James Canton, CEO of the Institute for Global Futures, sees very few bounds on AI’s capabilities: “Artificial intelligence becomes both as smart as and smarter than humans. AI will be embedded in autos, robots, homes and hospitals.”

You know how your iPhone seems fated to break or fail after about two years? And there’s always a next-gen something rendering your current something useless? Bill Buxton, Microsoft’s principal researcher, thinks that in 2016 this consistent frustration will start to wind down. “The age of digital baubles, do-dads and planned obsolescence will begin to fade, and the focus of industry and consumers will shift from technology, per se, to enhanced human experience, values and potential.”

And Lili Cheng, distinguished engineer and general manager at Microsoft Research NExT, expects more people to be working as we, the bloggers work — which change, she believes, will lead to further change: “More kids’ first jobs will be virtual rather than in a physical place. Over time, this will cause us to rethink the way we work, and the way we design our physical cities, neighborhoods and local communities.”

Step away from the coffee-shop counter, barista, and pick up that laptop. Get with the times.

Here’s IBM on how cities will begin to work for us, instead of seemingly against us, in five short years:

By 2025, 3D printers will print clothing at very low cost. There will be many free open source designs, but people will still spend money to download clothing files from the latest hot designer just as people spend money today for eBooks, music, and movies despite all of the free material available. …3D printers will print inexpensive modules to snap together a house or an office building, lego style.

And here’s Dr. Canton, who anticipates new frontiers of globalization:

“By 2025, there will be a massive Internet of everyone and everything linking every nation, community, company and person to all of the world’s knowledge. This will accelerate real-time access to education, health care, jobs, entertainment and commerce.”

Hard money will be a thing you croak about to your kids. The only use of your hundred-dollar bill will be to frame it above the mantelpiece. Apple CEO Tim Cook says: “Your kids will not know what money is.” And Dr. Canton expects money’s successor to be Bitcoin. “The next generation Bitcoin will replace traditional hard money, creating a new paradigm for digital commerce and business that will create a legitimate new economy.”

Let’s not exclude transportation. Tim Cook just hints at some big things brewing in the automotive industry. “I do think that the industry is at an inflection point for massive change.”