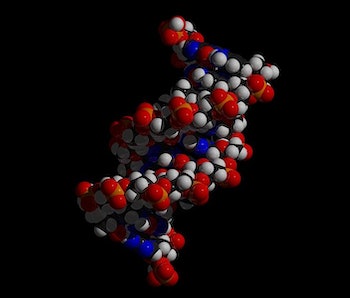 Academics and private healthcare companies are quietly choosing sides in the war between Amazon and Google as the tech giants fight to control the future of DNA storage. We’re talking about the future of personalized medicine and genome research, a business projected to be worth at least $1 billion annually by 2008. It’s a growth industry.

As in any format war (VHS vs. Beta, HD-DVD vs. BluRay, etc) both companies have their supporters. Autism Speaks is working with Google to collect genomes from 10,000 families and Tute Genomics has signed up with their collection of 8.5 billion human DNA variants. Meanwhile, Amazon has the Multiple Myeloma Research Foundation and the Alzheimer's Disease Sequencing project. Google can be a little cheaper, with $3 to $5 for a month's rent on a full human genome compared to Amazon's $4 to $5.

Researchers have good reasons to turn to the cloud for this stuff. First of all, it's a lot faster to analyze DNA sequences via cloud tech. Second, Jennifer Lawrence's nudes aside, the Google and Amazon offer much better security than anything a university locks down.

And for now don't worry about Google owning DNA the way Instagram jacks your images. The companies have agreed any discoveries made through the services will belong to the people who made them.