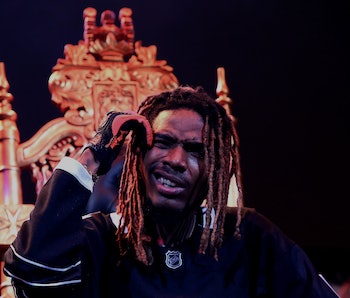 Recently, Pandora “predicted” the Artists to Watch in 2016. Thing is, a lot of them are never going to be worth watching, which is a flaw of using pure data deduction to determine something that’s ultimately a human evaluation. Others have been prominent for a while now, making a list like this — a list with a full publicity-fueled roll-out — appear more irrelevant. As much as Pandora hoped to develop a useful tool, it’s tough to draw major conclusions off of this kind of tracking.

The online radio service used data from Next Big Sound — an analytics company that it bought back in May that tracks songs’ popularity online and across social media — to determine the 25 artists on its list. A Pandora spokesperson wrote Inverse that the list “was a combination of industry insights from [Pandora’s] Music Maker Group and Next Big Sound data that looked at a combination of factors — how the artists are beginning to perform on Pandora as well as other insights, including social media conversation.”

“Next Big Sound (which also draws in the Pandora numbers) allowed us to look at other external factors and the engagement and reach for each of these artists via social media (this encompasses a variety of data points, including social conversation (Twitter, [Facebook], Instagram.) and reach). All of that data is reviewed by our Music Maker Group and Next Big Sound team to make the final list.”

That conversation, however, is impossibly difficult to track in the real world. There are third-party websites like TwitterCounter that will spit out a “Worldwide Rank” for a handle’s relevance. There’s also the more reliable Klout that gives a nice round score for social media importance. But some of Pandora’s artists, such as Brooklyn trio Wet have abysmally low Worldwide Rankings while others like massive UK electronic four-piece Rudimental have a similar Klout score to actual pop stars.

In 2014, Next Big Sound tracked about 450 billion streams from Pandora, among other services, meaning it should have a functional understanding of what people listen to on their devices. But any formula that can include no-names and world-touring artists on the same “Artists to Watch in 2016” list is at least partially flawed.

There’s no accounting for taste either, as BJ the Chicago Kid, an artist who’s had plenty of big looks but has never found true fame, is at the top of the list. If he were going to be famous, it would have happened already, regardless of what the analytics may say. (For what it’s worth, his TwitterCounter Worldwide Ranking of #110,659 does not really indicate a rising star either.)

While the Pandora Artists to Watch in 2016 list does not provide insight into the near-future of music, it does demonstrate quite well how data is not yet applicable to the art form. For now, there’s nothing the analytics could tell us that we don’t already know.