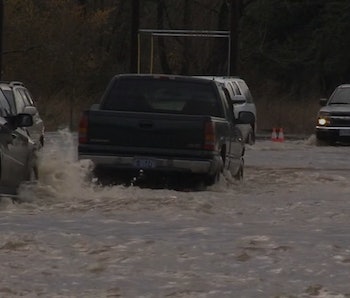 Don’t let people here fool you: Even though it’s our favorite thing to piss and moan about, true Portlanders love the rain. We love it. We love bragging to folks who have never had the pleasure of visiting the Pacific Northwest about how tough and robust we are when it comes to dealing with the elements. You want to make a Portlander feel really good? Ask us why we don’t carry umbrellas. We take great … nay … the greatest pride in smugly scoffing at the very notion of umbrellas in between sips of our $9 skinny soy half-caff no-whips.

Before hipsters, boutique pot dispensaries, and designer coffee, it was the rain that gave this outpost its identity. Portland has always had a bit of an inferiority complex, being the West Coast equivalent of the slacker little brother still living in our parents’ basement. But the rain? The rain is one thing we do better than everybody else. Well, kind of.

As it turns out, our dirty little secret here in the City of Roses is we don’t really get that much rain. The Portland metro area averages about 43 inches of precipitation per year. To put that in perspective, we actually get less rain than New Orleans, Miami, Nashville, Houston, Hartford, and Providence. Portland, Maine gets about 47 inches of precipitation per year. Not only are we nowhere near the wettest city in the nation, we aren’t even the wettest Portland.

Then, every so often, ol’ disrespectful-ass El Niño comes along and exposes our carefully crafted ruse by dumping inches of actual rain on us. Invariably this turns the city into a patchouli-scented Atlantis. Meanwhile, the rest of the nation — all the friends and family to whom we brag about being waterproof-skinned rain warriors — raise a curious eyebrow and say, gee, for a town full of rain warriors, you’d figure you folks would be better prepared for the rain. Yes, you would.

For Portland the real story isn’t the total amount of rain we get, but rather how we get it. On average it rains in Portland about 164 days a year, a total behind only Buffalo and Rochester. And while that basically means constant, non-stop precipitation from November to March, on most days, the rain is more like a wet fog. It doesn’t even seem to fall really, but just kind of hang there suspended in midair like a Dr. J finger roll on slo-mo replay.

The reason we don’t use umbrellas has less to do with us being half-duck, half-raincoat badasses, and more to do with how useless umbrellas get when east winds kick up to 30 mph and omnipresent drizzle comes at you up, down, and sideways. Yet while it’s miserable, cold, and, depressing, there are very few days where we get what most people would consider “real” rain.

The reason the entire city gets caught with its organic cotton, fair-trade, skinny leg chinos around its ankles every time El Niño’s punk-ass comes knocking, is because Portland is built to handle schwaggy Portland rain, not the good shit our favorite tropical weather system brings to the party.

Even though the Portland-Metro area is basically a giant basin surrounded by hills and mountains, our drainage systems are woeful, antiquated, and pathetic. On top of that, somewhere along the line we thought it would be a great idea to plant deciduous trees over the top of the city’s drainage gates, which is basically the infrastructure equivalent of your Uncle Fred heading into the bathroom with two rolls of toilet paper after Thanksgiving dinner.

At low elevations, we build on top of rivers and creeks that handle runoff of several mountain ranges. Those waterways tend to swell quickly during the winter from the added runoff, and are pretty much always one big storm away from flooding even in the mild years. One of our favorite things to do as a city is build the really important stuff — highways, trams, and fancy houses — directly on the hillsides facing the city. Heavy rain plus gravity equals mudslides, which tends to be bad news for commute times and property values.

Monday [broke Portland’s single day rainfall record] with a whopping 2.7 inches. There has been flooding, mudslides, and even a massive sinkhole outside a local community college. Several roads have been shut down, making nightmares out of commutes, and several folks are going to wake up tomorrow to cars with soggy floor boards. Still, the damage so far has been relatively minimal. And though there are still a couple of more heavy rain cycles coming through, thankfully, it doesn’t look like its going to be a repeat of the last major El Niño event back in January of 1996. That was so severe, both banks of the Willamette River flooded.

Portlanders are taking the damage — both to our roads and reputations — in stride. For the most part, we’ve dealt with the soggy conditions by poking a little fun at ourselves on social media. The city, to its credit, acted quickly to get crews out to clear drains and mitigate the worst of the flooding on city streets, and are working around the clock to clear mudslides to get traffic moving again. Come what may, we woke up Tuesday morning, threw on our favorite Columbia Sportswear jackets and Birkenstocks, and jumped right back into the fray. We may not be quite as waterproof as we’d like you to think we are, but we’re doing OK. We know that hazy, misty days are right around the corner.