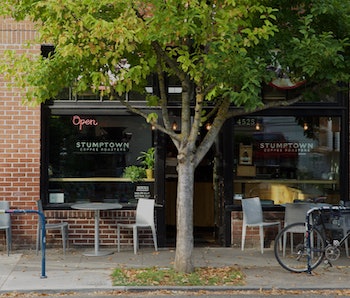 PORTLAND, Oregon — Josh Jones, a 24-year-old retail worker, is a regular visitor to Stumptown’s SE Division location. Sporting thick-rimmed glasses and a red and black flannel shirt, Jones is almost the perfect picture of what many would consider a certain Portland stereotype, down to the well-manicured beard and newish looking Adidas Sambas. When I ask him about how one of Oregon’s cherished upscale bohemian brands will weather its sale to a massive coffee chain, he sipped his latte and waxes anthropological. “I dunno, I don’t really like the term ‘hipster’ because it’s a generalization, but … yeah, I guess,” he says. “I can see why people think Stumptown is a hipster place, but really it’s just a chill place that sells great coffee.”

The death of the hipster coffee joint in Portland has been greatly exaggerated, perhaps not least because people enjoy watching hipsters squirm. Truth is, this town will find ways to serve up hot (and cold) brew till the only place with any street cred is a Texaco dishing up lukewarm Sanka for $17 a refill. But Stumptown was one of ours. When asked about the recent Peet’s coffee acquisition of the company many credit with launching Portland’s craft coffee industry into the national limelight, Jones is fairly indifferent. “I read a couple articles on the internet, but I don’t see what the big deal is. Looks like a lot of people who don’t even live here turning it into a bigger thing than what it is.” While Jones hopes that the corporate buyout doesn’t result in Stumptown becoming an overpriced Starbucks, the chain won’t lose him as a customer anytime soon: “As long as the quality stays good and the prices don’t go up, who cares? That’s business, right?”

Sasha Hunt is a 32-year-old grad student who self-identifies as a “coffee enthusiast.” Like Jones, she’s also a bit perplexed by the “Portland hipster panic!” coverage. “Anyone who knows anything about the craft coffee scene here wasn’t surprised at all. Stumptown makes good coffee, and they do a lot of things right when it comes to taking care of their employees and making a point of sustainability and that stuff, but they’ve been mainstream for a long time. They sell coffee all over the country, and have been a corporation for years.”

Hunt is right on that account: After 12 years of building up the Stumptown brand, owner Duane Sorenson sold a large chunk of the company San Francisco private equity firm TSG Consumer Partners in what was a fairly covert deal back in 2011. And while news of the buyout caused some of the same sort of waves within the craft brewing community when it was finally revealed, Stumptown was largely able to stick to the same principles that made it a success.

Of course the worry, or at least the attributed worry, is that while TSG provide an influx of cash, the investment firm seemed to have stayed focused on bean-counting over coffee production. However, the publicly traded Peet’s is one of the largest coffee franchises in the nation. With 100 percent ownership in the Portland-based franchise, it’s a sure bet that Peet’s will begin making changes, however gradually, to Stumptown’s day-to-day operations. As the company expands, new employees might not get the same health benefits, the company may have to seek less-sustainable sources for its coffee beans, and at some point, the company’s headquarters may leave Portland altogether.

Businesses, regardless of the industry, look to grow. Before Starbucks became the Gap of coffee, it was a trendy, independent craft coffee roaster that gained fame for making better coffee than Folgers. Stumptown’s notoriety came by being better than Starbucks, and its owners are cashing in on their hard work. Right now, there are no shortage of small craft coffee shops across the country hoping to repeat that same cycle of success.

But even in light of that impending threat of Peet’s trying to turn Stumptown into the next corporatized coffee clone, Portland, and its hipsters, aren’t nearly as worried as you might be lead to believe. “There is so much good coffee here” says Hunt. “There are dozens and dozens of local craft roasters that are making great coffee out of sustainable, fair trade beans. Honestly, most of the hardcore coffee people already moved on to newer, smaller places a while ago. Coffee drinkers in this city will always be OK.”