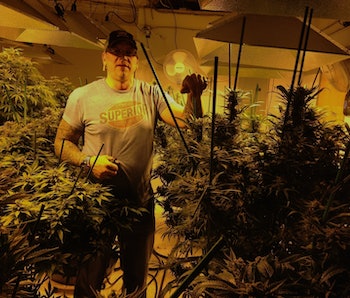 On the morning of October 1st, the excitement inside the Little Amsterdam Wellness Center’s Macadam marijuana dispensary (located in one of Portland’s trendiest and most affluent neighborhoods) was palpable. Staff flew around making sure signs and products were set, managers performed last-minute checks to ensure the compliance guidelines handed down by the state were properly implemented. Meanwhile, an eclectic group of customers awkwardly filed into the lobby, awaiting the chance to legally buy recreational marijuana in Oregon (well, almost all of Oregon) for the first time.

You’d figure folks in Portland would totally know the drill by now, even on Opening Day. And yet, people found a way to make things awkward.

A young man in a fast-food uniform sheepishly approached the receptionist and asked, “OK, so how does this all work?” while an older couple repeatedly asked for assurances that their information wouldn’t end up in “some government database.” Meanwhile, a group of four middle-aged business types in suits hopped out of a late model Mercedes and jokingly asked if they could just hand over a wad of cash and “take one of everything!”

Once all the ID’s had been checked (for recreational sales, dispensaries must verify that the customer is over 21, but no personal information is recorded or stored), the group was buzzed in to the main dispensary area, which resembles a boutique confectionery more than a head shop. Without exception, even the most nervous or apprehensive new customers evinced a sly, cat-that-ate-the-canary-grin once they laid eyes on the jars of 27 different strains of marijuana. All for sale, all above-board.

“I’ve been getting excited reading about this for a while now,” said Leonardo C., a 23-year-old stopping in on his lunch break. “But it’s hard to believe I’m standing here about to legally buy weed in a nice place like this. I feel free.”

Little Amsterdam co-owner Garth Fladwood, a giant man of infectious optimism, looked on with a smile. Little Amsterdam’s newly renovated second west side location (about a mile down the same street) had successfully opened its doors for the first time, while their east side location, in the working class suburb of Milwaukie, called in to report that customers had started lining up around the block hours before the doors opened.

For Fladwood and his fellow owners Renee and Michelle Barnes, the influx of recreational pot purchases was framed by their previous experience as a medical marijuana dispensary. “The recreational sales are going to be great for us, but it’s still secondary,” Fladwood told me. “Sure, it’s money, it’s great and we certainly support everyone’s right to use recreational marijuana. But for us, we’ve built this thing up providing relief and education to people who need it. It’s medicine for them and we have to make sure to pass on the same quality, professionalism, knowledge, and feelings of safety and confidence on to our new recreational customers.” Where the business dudes saw a chance to get blazed, Fladwood sees a way to ensure a business built on health care.

The path toward legalization seems win-win for customers and the more than 200 medical dispensaries licensed to sell recreational pot across the state. Still, there are hurdles. Both the regulations and the regulators are in flux: The Oregon Medical Marijuana Program will still be responsible for most aspects on the medicinal end but the Oregon Liquor Control Commission, which has been tabbed to regulate the recreational end, is still hammering out permanent policies.

In the interim, only flowers (defined as “flower and dry leaf products, plants, and seeds”) will be sold to anyone without a medicinal card (sorry kids, no edibles quite yet), and customers will be limited to buying seven grams at a time. On the positive side, recreational users will have about a four-month window before an additional 25 percent tax kicks in — currently dispensary prices for a gram of marijuana are only a few dollars more than a comparable strain from an unlicensed dealer. Yet people worry the resulting price jump might dissuade some folks from going to dispensaries (or might price others out entirely).

Fladwood admits the delays are frustrating, but adds that he welcomes regulations that ensure quality and accountability. “I love the regulation,” he said. “We sell safe, organic products. We know that all of the product we sell, whether we grow it on our farms or buy it from local farmers, is thoroughly tested by a third party. We want to keep the product free of mold, mildew, and pesticides. We find any of that, we don’t sell it. Period.”

That’s not just playing to the Portlandia “I want to know the plant’s name before I smoke it” crowd. Medicinal marijuana users tend to be pretty educated buyers out of necessity: They know the type of THC levels they need, they know whether they need a Sativa strain, an Indica strain, or a hybrid. With an almost infinite number of strains available, causal marijuana smokers will benefit tremendously.

Dispensary owners know recreational sales might slow once the tax hits and more consumers start growing plants of their own. (It’s now legal to grow up to four plants without a grower’s license.) For some consumers, the quality, clarity on the product, and the knowledge provided by the staff potentially adds extra value. “It’s cool you can come to a place and know what you’re getting,” says Melanie Lee, a 31-year-old Portland resident. “I’d rather pay more money to know what I’m getting.”

Of course, there are still question marks moving forward. Oregon’s Measure 91 and the companion House Bill 3400 took sweeping steps to decriminalize marijuana possession, but language on guidelines and legal definitions for selling, transportation, distribution, and possession are still a bit murky.

Oregon residents can now carry up to one ounce of marijuana in public and have eight ounces in their homes. But what happens if a cop knocks on your door while you’re harvesting more than eight ounces from a plant? You can “share” any of the weed you grow with friends, but there are some legal questions as to whether selling “for economic betterment” includes any sort of bartering — if your uncle Steve kicks you down an ounce for fixing his fence, is he violating a law? You can’t smoke in a “public place,” but is your front porch considered public or private? Will lighting up while tending to the petunias in the front yard get you a ticket?

For as many questions, concerns, and loose ends as there might be, at least for now, people around the state seem to be fairly content enjoying themselves. Who knew the scent of freedom could smell so … sticky icky icky.