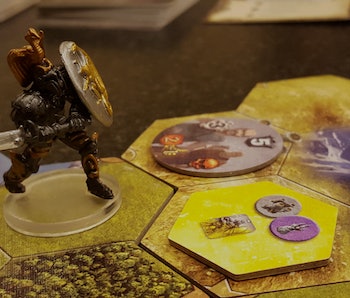 A pet theory to explain the surge in rolling dice and shuffling cards might go something like this: Casual video games have made it culturally acceptable — culturally milquetoast, even — to be a gamer. Likewise, designing cardboard or keyboard games is increasingly polished and sophisticated. Of these, we choose the tabletop path because it’s a respite from the all-consuming screen. It’s also a way to schmooze comfortably over a shared medium with friends or — gasp! — randos (especially for people who feel the art of the offline chat is dulled, or for kids these days who never really had it to begin with). And so the board game ascends.

But what if you cut out the social heart of a board game — can the solo experience transcend hermitude, or at least solitaire? Yes. Will you like it? Well, enlightenment comes in four stages, but we’ll get there in three.

Stage I. Am I really doing this?

Yes. Maybe you’ve consciously unplugged from your PlayStation 4, your girlfriend is out of town, and you’ve heard Master of None is fantastic, but you have an irrational prejudice against Aziz Ansari’s twee AF ethos. So your eyes flicker over to Mage Knight, hiding in the corner of a bookshelf. It was published by WizKids and built by renowned game designer Vlaada Chvatil out of the wreckage of a collectible war game that tried to superglue Magic: the Gathering’s randomized booster packs to Warhammer. It is tough to learn — “heavy,” in board game parlance — but smooth to play, despite its 30-minute set-up time and obligatory rules refresher.

Distilled, it sounds trifling: You are a mage knight, whatever that is, and you travel the land slaying beasts and storming foreign cities while building a potent brew of action cards. But damn does it capture that looting, leveling, dungeon-crawling feeling better than any board game around.

And, as it goes, you can play it by yourself.

Stage II. Am I going to cheat?

You’ve gotten over the awkward hump of laying out the game board by yourself, rolling dice with no other reaction than your own, and found peace in the fact you didn’t have to fight for your favorite character. It will not dawn on you until later, when a tile reveals a particularly nasty dragon, that there’s no one here to keep you honest. There’s a momentary glitch in your ethical matrix — you could just give yourself that one extra damage, and neither enemy A.I. nor living soul would know. You did, after all, spend 30 minutes sorting cards and laying out tiles. Dang, man. Maybe you even earned it.

But that makes you face the reality of why you’re doing this: It’s challenging. Like life or Sudoku, this game is a puzzle, but sometimes this puzzle wins and you die and that’s life, champ.

Stage III. Will I play again?

The mark of a great solo board game, which Mage Knight is, is that it leaves you wanting. Perhaps you won, so you ratchet up the difficulty or you introduce the game’s best character, a villain to test your deck-building mettle. Or you’ve stumbled and lost; but unlike certain single-player games, this feels fair. An early misplay did not prematurely doom you, unless it was extreme (you really shouldn’t have tried to tackle that lava dragon so soon). Nor is it randomly and occasionally unwinnable, straight up.

You realize what also separates this from a video game is not just the lack of a screen but the absence of explosions and flashing lights and sweaty palms. The stillness and solitude here approaches the calm of stacking dominoes or doodling a toe in the sand, and if that’s your cup of tea, drink deep.