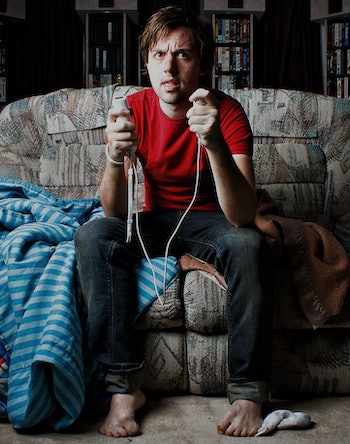 He had a smile like a gap in the Alps. Floating in his oversized blue eyes, you could soak yourself pruny. His muscular tail ended in a tuft of flame, which he would lash into the faces of your adversaries on command. It was the summer of ‘99, and neither D.A.R.E. nor doomsday prophecies could keep kids off Pokémon. I was in puppy love with 150 anime lizards and bugs. It was a glorious time to be alive.

I want to go back and look into those young, starry eyes with a bloodshot, purply-bagged stare. Remember this feeling, I’ll shout like a time-traveling lunatic, remember your first Charmander, because down the line this relationship goes fubar. Sixteen years later, I’m breaking up with video games.

It’s been a torrid decade and a half. If the Great Fan Wars taught us anything, your choice of platform defines you as a gamer. These are the consoles that have colonized my gut: Pokémon and a GameBoy Color spawned a GameBoy Advance, and then a PlayStation 2, which mutated into PlayStation 3 and finally PlayStation 4. Wedged in there were six-month stints on the PC: springtime for World of Warcraft, a winter cozied up next to Guild Wars 2, a flirtatious summer with Diablo III.

Like the worm that sucks its own tail, I swing back to old favorites. This summer I was once again in the talons of Diablo III. It’s the closest I’d ever been to scoring that most elusive of video game achievements, a platinum trophy: Just a few bounties to mop up, just one more character to get to level 70.

Hey! Check this out, I said. I’m the closest I’ve ever been to a platinum trophy, that most elusive of video game achievements!

What does that mean? my girlfriend said, curiosity possibly real but at least warmly feigned.

It turns out you can’t answer that question without sounding like someone who spends altogether too much free time with a controller between your sweaty mitts.

In a series of groundbreaking experiments in the 1930s, Burrhus Frederic Skinner developed a machine that would come to bear his name: The Skinner Box. (He preferred operant conditioning chamber, but he’s dead now and the phrase Skinner Box lives on.) B. F. Skinner showed that pigeons, upon seeing a specific signal, would spin in a circle or peck at a target for the chance of a reward or reinforcement. In a similar vein, Skinner installed lights and levers in rat cages. When the light came on, the rats scurried to the lever and pressed it. Sometimes a food pellet popped out. Sometimes it didn’t.

Diablo III is a gamer’s Skinner Box perfected: You defeat demons and monsters in the hope of acquiring flashy green loot, which lets you kill more powerful monsters, which lets you get improved shiny green loot. Ouroboros shivers in pleasure.

But it wasn’t just Diablo. I started seeing Skinner Boxes everywhere I looked. Witcher 3 quests would set me on long trips sailing from isle to isle, to be rewarded with experience or gear, only to ship me off in search of tougher Nordic beasts. There was my lever, in the gun-leveling system of every FPS since Modern Warfare. The loot-cycle of Destiny’s first year was a gear treadmill operated by cold probability tables: Every drop of gear was a chance I would level up, and the only way to increase my odds was to keep playing. My time bled away in minutes and hours.

I don’t believe that videogames are truly addictive; neither does the World Health Organization or the American Psychiatric Association, though both groups has called for more study. The distinction is one of tolerance. Unlike the need for larger heroin doses or increased gambling bets, as Robert Wood, a psychologist at Nottingham Trent University wrote in 2008, sitting for longer periods of time in front of a screen doesn’t ramp up the intensity of the game.

In fact, the opposite is true: Too much of the video game glow bleaches the fun out of it. The lush, giant worlds of today’s triple-A games justify their $60-a-pop price tag with hours of escapism. But once escapism uncouples from entertainment, you’re fucked, and you find yourself at a loss for why a platinum trophy looked so shiny in the first place.

If you like your cups of tea the size of hot tubs, great. Video games, their mechanics, and environments have never been so polished. I look to the 18 quintillion worlds of No Man’s Sky with the same mixture of fear and admiration I would should I stumble upon a pit viper basking on the sidewalk. It’s beautiful. I really should stay away.

I hear books are nice, this time of year.