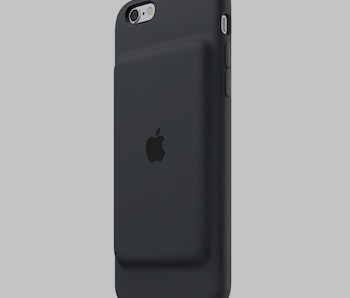 Apple announced the company’s first official battery case for the iPhone 6 and 6s last night. The new Smart Battery Case guarantees an additional 11 hours of talk, on top of the roughly 14 hours already offered, boosting that total to 25. But who is using their phone to talk? Currently iPhones offer 10 hours of internet per charge. The battery pack brings that up to 18. That’s the number that matters, but it isn’t the most significant thing about the release.

The undisputed goal of the new pack is to address the longstanding criticism of the iPhone that its native battery doesn’t last a full day. Apple made a big deal about improvements in iOS9, including facedown detection and reduced CPU wake-ups, in order to address that issue, but ultimately failed to produce a product capable of satisfying the work hard, play hard crowd. If the battery pack doesn’t represent a mea culpa, it absolutely does represent an acknowledgement of the issue and a sensitivity to different use cases, notable the all-internet, no-calls case.

What’s maybe most interesting about the case is that it represents Apple giving its customers something they requested. Under Steve Jobs, Apple was all about being visionary, which meant giving consumers what they wanted but didn’t know they wanted. Under Tim Cook, we’re seeing a subtle pivot away from the unexpected. The battery pack is a fundamentally banal product that exists for practical reasons. It will do nothing for the Apple brand overall, but will sell some units and help some customers. Just don’t expect this thing to make the stage at the next Apple presentation.

Gadget analysts will likely spend the next month or so comparing this bit of new tech with comparably priced battery packs from other manufacturers, but performance is sort of beside the point here. The point is that Apple seems to be watching its customers in a new way.