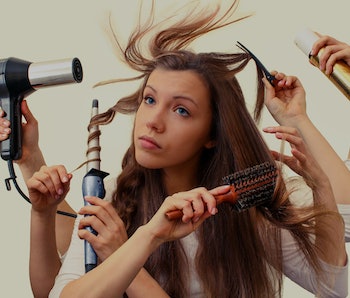 IBM decided to create a campaign to change the misconception that women don’t want STEM (science, technology, engineering, and math) jobs, which is awesome. But when IBM decided to bring it all together under the rallying cry of #HackaHairDryer, the company proved that it doesn’t really get the inherent misogyny that it claims it is fighting against.

Some of the original Tweets appear to be deleted, but Inverse grabbed a screenshot:

“Blast through the bias and bring innovation culture into balance,” IBM instructs in a video where, after much exposition, an experiment’s goal ends up being getting ping pong balls into a basket. “How? Hack a hair dryer.”

IBM has since apologized and admitted that while its’ goal was to promote STEM careers, the #HackAHairDryer idea “missed the mark.”

The internet clapped back Monday, with many women arguing that the campaign was dismissive to their jobs as serious scientists and innovators.

IBM seems to be scrubbing away #HackAHairDryer from its site — the original video called for viewers to go to ibm.com/hackahairdryer but if you go there the web address has redirected completely. While the word “hair dryer” is nowhere to be found, there is material on the company’s “26 Innovations by 26 Women” initiative.

While #HackAHairDryer gave the impression of a well-intentioned campaign, whoever designed it clearly didn’t understand its’ purpose. Women don’t need to hack a hair dryer to get into tech anymore than men need to create a Dorito-proof football jersey to get into fashion.

Here’s a hack tip for corporations trying to make good face: Don’t create a gender equality campaign and then be as stereotypical as possible.

More like this
Mind and Body
7.1.2022 8:00 PM
How to spot a liar using a classic mathematical trick
By Dorje C Brody and The Conversation
Gaming
7.5.2022 1:30 PM
17 years ago, Yakuza reinvented video game masculinity
By Cian Maher
Science
6.30.2022 11:00 AM
NASA launches CAPSTONE and more: Understand the world through 8 images
By Robin Bea
Share: