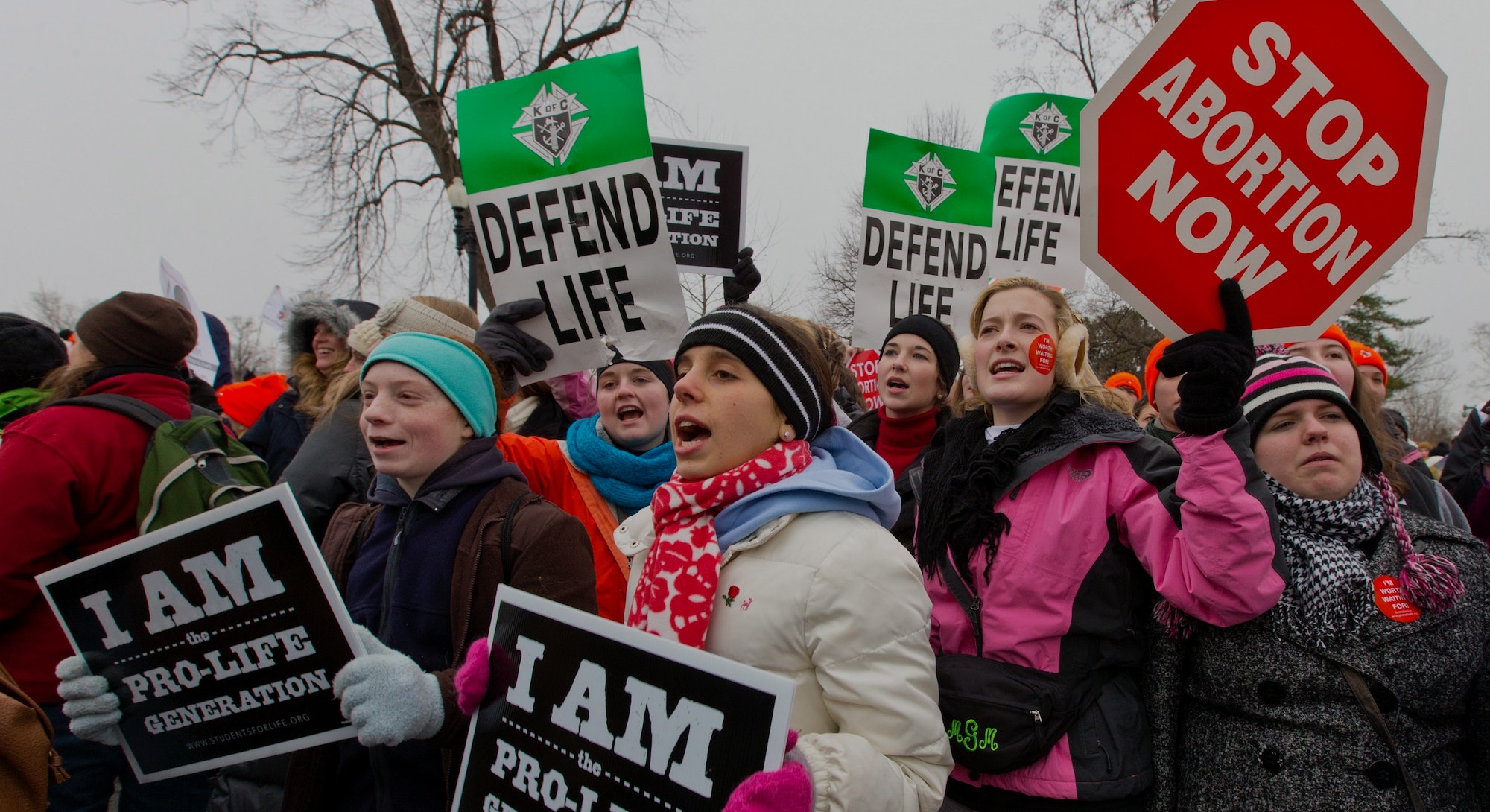 Thirteen miles south of downtown L.A. you’ll find Downey, California. There’s a historically significant NASA plant, and it’s home to the first McDonald’s and the first Taco Bell. Mostly, though, it could be anywhere — and for me, it’s home to a struggle happening across America. Less than a mile from the world’s first fast food drive-through sits a clinic called Family Planning Associates Women’s Health. Every Sunday morning, I pull up to that clinic, throw on an orange shirt that says “PRO CHOICE,” and proceed to get yelled at by the worst people imaginable.

A few years back, a friend of mine who is also a standup comedian asked if I’d like to get involved in the world of helping out around women’s health clinics. I’d never really thought about it, nor did I even know there were people who actively donated their time to standing around such a volatile place. Then I saw my friend Will Weldon’s bit about what he experienced while volunteering.

I knew I had to get involved.

I’m a volunteer for L.A. For Choice, a group whose essential function is to escort women who are seeking reproductive healthcare at women’s clinics past the fire-and-brimstone cranks who protest them. Founded in 2009 after the assassination of Kansas abortion doctor George Tiller, the group initially organized as a response to the 40 Days for Life movement, which encouraged members of the religious right to undertake a heightened, month-long protest outside facilities that perform abortions. After protecting women at a local clinic during those 40 days, organizers realized that the need for protecting women really required a year-round commitment. Now, at multiple clinics in the L.A. area, volunteers come out each weekend to provide a friendly face and supportive voice to those who might want one.

The Downey clinic in particular affords the nightmare-people who protest women’s clinics an array of vantages for harassment. Many women’s clinics, especially Planned Parenthoods, are nestled on private property, which anti-abortion protesters aren’t allowed to stand on. But anyone can protest from public sidewalks, which — as in the case of the Downey clinic — often lead up to a building’s front door. On the opposite side of the building stands a waist-high wall where men stand to wave giant posters of dismembered child corpses just that much higher. The clinic’s street-facing wall offers only a thin barrier between the waiting room and the protesters outside who blast bizarre recordings of children’s laughter while shouting Bible verses and praise songs.

Our role as L.A. For Choice volunteers is straightforward: to escort women safely into the clinic and back to their cars. To this end, escorts must create human walls to keep the anti’s from swarming and physically preventing women from entering the clinic. It seems like such a simple prompt. But each Sunday morning still feels like a punch in the gut. It’s literally insane that people like me have to put ourselves in harm’s way to keep a business open because the public cannot access it without physical harm or threats. Like me, several of the volunteers there are standup comedians from L.A.’s alternative comedy scene. I’m not sure why this role calls to so many of us. I suspect that handling hecklers on a nightly basis helps us build a thick outer layer, and the awfulness of some protesters reading passages from their blogs into megaphones is never as hurtful or clever as what even our best friends roast us with.

Still, the surreality of the clinic confrontations surprises me. Abortions are not the only medical services the clinic provides — the Downey clinic, called FPA Women’s Health, offers OBGYN care, family planning, and the like. The worst thing I’ve witnessed was a very religious woman who had experienced a miscarriage coming to see whether she could try again to have a child. Before she got to see the doctor, a pastor explained to her that she was going to hell for her miscarriage. She broke down in tears. We had to carry her back to her car.

Our escorting group has a non-engagement policy. No matter what protesters do or say, we cannot engage with them. In turn the protestors, aware of our limitations, may stand inches away from an escort’s body, berating us for hours on end about whatever: weight, visible scars, perceived effeminacy. It’s bullying, by hacks.

Some of our protesters are professionals. They serve in churches and organizations where they leverage their actions here for financial contributions so that they can keep sticking it to monsters like me. I know they think I’m a monster, because on more than occasion men have stood inches from my face and, trembling and teary, shouted about how they do not fear me. One protester in particular likes to remind me that I’m wasting my life by coming out on Sunday mornings. I’d love to remind him that I’d prefer not to crawl out of bed early on weekends, but I have to because he keeps showing up. Maybe someday he’ll decide to stay home so I can too.

I’d thought for a while the worst I’d encounter was the mind games of a regular protester who appealed to our sense of decency by making salient, humanist points. The one time I turned to say something to him, I realized he’d been changing into a costume of blood-smeared surgery scrubs and was now holding up a bunch of bloody doll parts. He hissed at me like a snake. That day he also followed one of our escorts to their car and wrote down their license plate number. He regularly brings his small children and encourages them to throw rocks at us and to blow a trumpet in our ears.

Yet it did get worse. A few weeks later, his buddy tried to hit me with his SUV.

To the local cops, this all unfolds as an elaborate pageant in which they ensure the two sides — the protesters and the people who protect women against them — play nice. I’d rather they work to keep everyone safe.

Every summer, a Christian anti-abortion summer camp attended by nearly 1,000 teens floods our location with busloads of furious kids. They’re educated by a group called Survivors of the Abortion Holocaust, who know teens can get away with much more than adults and anyway are impossible to arrest in such numbers. With the instructions to hold nothing back, these poor kids are often our most dangerous visitors. They openly threaten volunteers with murder and rape. The resulting mob scene encourages the regular protesters to go bigger, to show the kids how violent they’re willing to become.

Survivors of the Abortion Holocaust will also start picking back up in the next few days. They like to spend December in an assault they call “Christmas Caroling.” They arrive at clinics and pretend to be carolers. Then, shedding the guise of Christian good will, they rush the doors and attempt to physically harm clinic escorts in the confusion.

So a group known for becoming dangerous in moments of escalation will be starting its tour just weeks after the Planned Parenthood shooting in Colorado Springs. And that’s not great. That’s super not great.

The weekend immediately after the shootings, I expected Sunday to feel different. Maybe I just hoped it would. The very real violence could have cooled the rhetoric this week, even just a little. Instead, it was business as usual. Long patches of nothingness were punctuated by bursts of threatening activity and speeches by bigots and conspiracy theorists explaining that blacks and Jews were being controlled by Calvinism(?) and that The Walking Dead proves we are in the end times.

Reflection, perhaps even reconciliation, will have to wait. More than ever this feels like trench warfare, a stalemate in which the cost is measured not in bodies but in hours wasted. Weeks. Years.

This week, the Colorado shooter stood up and announced in court that he was guilty; guilty of protecting all of the babies. A chill runs up my spine, not just because that’s so unhinged, but because I’ve heard the same thing shouted in my face by adult men, and teenage kids, and elderly women holding giant photos of mutilated corpses. The aim of the Colorado shooter, and of the protestors, is to intimidate women. They want to instill the fear that seeking necessary, legal care will bring harm upon them. But, at least to date, murder has been a line that abortion opponents rarely cross. A visit to the clinic is still overwhelmingly safe. On my best days, I think we volunteers help keep it that way.

That implicit threat, though, feels more real after Colorado Springs, in no small part because of the heedless absurdity of some protests. A couple weekends back, for instance, the power went out at our clinic. We had to turn patients away, to send them to other facilities. We stuck around to make sure the doctors and nurses made it out OK. As volunteers followed suit and headed home, they broke the non-engagement policy to let the few remaining protesters know that the building was empty and the power was off. Another escort and I stuck around another half-hour just in case.

I mentioned earlier the man who asked me why I didn’t just leave, and I said how I was sure there was a day he wouldn’t need to come anymore and then I’d be free. Well, we escorts watched as that guy stayed behind to hold a giant sign over his head and to scream at what he knew was a completely empty building. It was a darkly hilarious but painful reminder that this might be volunteer work that takes up every Sunday for the rest of my life. If this is a war, I’ll probably never see it won. The ideology we’re up against is yelling at a wall just to yell at a wall.